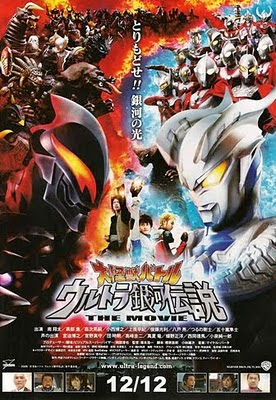 Allow me to start off this review with a quick question. Would you consider your knowledge of all things Ultraman to be: 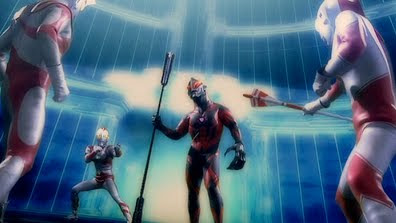 The movie begins with the introduction of the Land of Light; home planet of the Ultramen. The inhabitants’ peaceful daily routine goes sour when Ultraman Belial, an incarcerated renegade who previously attempted to overrun the world with an army of monsters, escapes from his space prison. Belial heads straight for the Land of Light, knocks around the locals and successfully makes off with the “Plasma Spark”- the power source for the whole planet- leaving behind a frozen wasteland. Now the only hope in stopping Belial and returning things to normal lies with a powerful Ultra named Zero, who is away training in a remote galaxy. 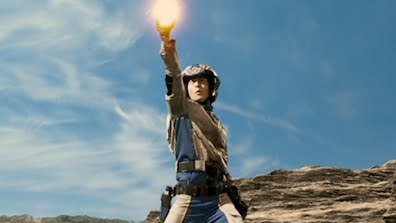 While what I’ve explained up until this point, story-wise, seems straightforward enough, things get a little more convoluted once the cast of characters from the television series Ultra Galaxy Mega Monster Battle appear and drop into the story with the assumption that the audience is completely up to speed with the show. That’s when I realized that I wasn’t watching a stand-alone, self-contained movie; this was a massive crossover exercise showcasing the entirety of the Ultraman franchise. To make use of a geeky analogy, imagine if Marvel Comics decided to make a film that featured Spider-Man, The X-Men AND The Incredible Hulk AND The Avengers AND Blade the Vampire Hunter as they team up against a selection of popular super villains. Would this make Marvel comic fans happy? Probably. Would there be time in the movie to explain all the details and nuances of said characters for the uninitiated viewers? Probably not. 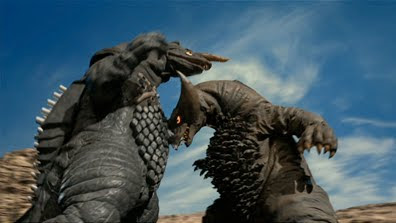 While I couldn’t appreciate the movie on any sort of nostalgic level, Mega Monster Battle does move along at a decent pace with no shortage of rubber-suited, monster-brawling antics, so I was never bored. It is kind of weird, though, that all the various creatures from the Ultraman rogues gallery which make appearances are are mostly reduced to the level of cannon fodder; being easily knocked around with an ease that I can’t help suspect is probably contrary to the challenge that they presented in their original television appearances. 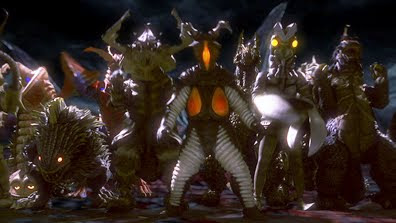 Admittedly, the film does reach a numbing point by the story’s climax, as you might expect from sitting through an hour and half of interchangeable silver and red characters punching stuff. As I had mentioned in my previous review of the original television series, Ultraman himself is a rather uninteresting individual- basically a deus ex machina plot device used to defeat the giant monster antagonist at the end of an episode. Teaming up a bunch of them together does little to solve this shortcoming but it’s not as if the movie was ever intended to be a deep character study. 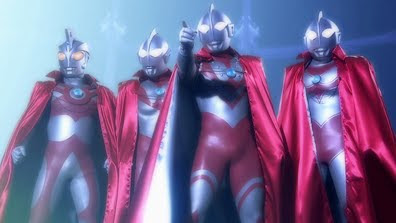 Overall, Mega Monster Battle can be best summed up as a harmless “popcorn” film. You’ll probably get more out of it if you’re an Ultraman fan, but even as an outsider looking in (like myself), there’s still enough entertainment value to make for an amusing watch. Three out of five.

Posted by Mysterious Pants at 7:40 PM

So in a way it's the Godzilla Final Wars of Ultraman. Cause in there too monsters are dispatch with a level of ease unseen in any other G-movie. Heck the Giant Lobster is killed by government forces, government forces! It's insane I tell ya!

Cyborg Trucker: I have yet to get to see Final Wars, though I've gotten extremely interested. But that's one of the first negative comments I've read (without doing any diliberate research), and is sad to hear.

As someone who falls into the "A" category (A fan of the original show since it first came to America), I can honestly say that the amount of Ultra the movie throws at the viewer can be overwhelming. (Thank god for pause and rewind to help confirm various Ultra characters) Still this is a great film with well choreographed fights (though maybe a little more plot between them wouldn't have hurt) and a great villain. IMHO the best Ultra film since Ultraman Tiga: Final Odyssey.