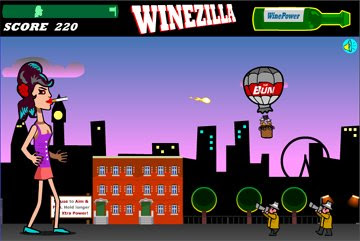 If there was ever a celebrity who would make for a terrifying giant monster, you couldn't do better than Amy Winehouse; alcoholic musician and human drug repository. In this quickie Flash game, you control a mutated Winehouse as she searches for her husband while destroying the paparazzi and military forces. Be sure to stomp on liquor stores and vagrants sleeping on park benches to collect booze for keeping Amy’s strength up!

The second issue of the new Space Magazine Uchusen came out this month and featured another installment of Toho monster-themed artwork. I would have had these scans up sooner, but as the King Ghidorah/Gorosaurus piece was a double-page spread, I had to perform some Photoshoppery to bridge the gaps in the “seam” between the two halves (unfortunately, the pages didn’t come apart perfectly for scanning). 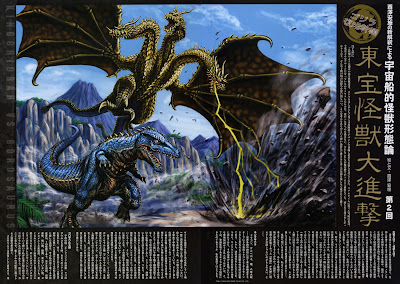 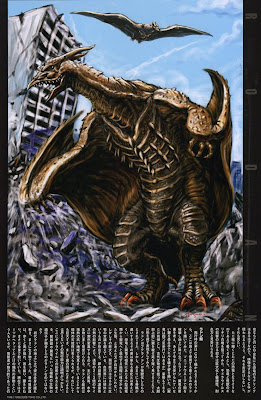 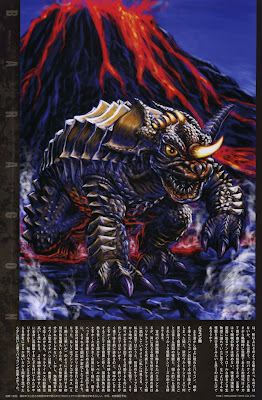 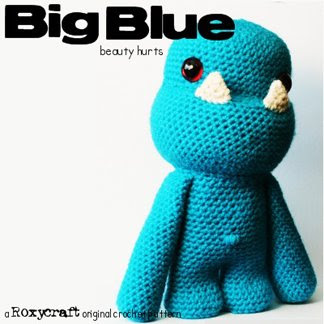 I recently came across this ad for a do-it-yourself yarn craft project- is it just me, or is this thing seemingly inspired by the Cloverfield monster? The head shape, tusks and long arms are very similar- it's like you're looking at a cutesy, stuffed animal version of said creature. 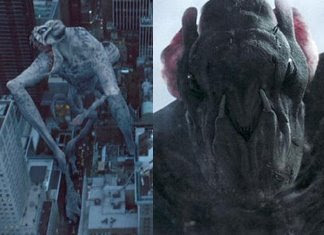 I'm probably seeing a connection that mostly likely isn't there. I tend to do that a lot. Perhaps if there were some little yarn buildings around it, I could be sure...

Posted by Mysterious Pants at 12:14 PM No comments:

The Mouse Does Monsters Looks like Disney’s getting into the act of giant monster movies too. From Variety:

Disney has picked up the film rights to graphic novel "Monster Attack Network" from publisher AIT and Planet Lar for Jason Netter ("Wanted") to produce.

Book, penned by Marc Bernardin and Adam Freeman with art from Nima Sorat, takes place on a South Pacific island where a team of first-responders rescue residents who are regularly attacked by giant monsters who emerge from the sea.

Netter's Kickstart Entertainment will produce the project. Shingle is also producing Sci Fi Channel's upcoming series "Painkiller Jane" and has adaptations of several other comicbook properties in the works, including "The Boys" at Pictures with Neal H. Moritz.

I thought at first that this might be an animated film- a sort of response to Dreamworks’ Monsters vs Aliens project, but it sounds more like a live-action undertaking, what with the production reigns being handled externally and all.

Congrat’s to the Monster Attack Network creators- when I read the book, I thought it would make for a neat film and it seems that I wasn’t the only one.

Posted by Mysterious Pants at 7:59 AM No comments: