I recently received an email from a visitor to my blog who wondered if I could help identify a giant monster movie that he had seen in the past, but couldn't recall the name. An excerpt from said mail reads:

I have a question for you and your readers. I have not seen the movie in about 45 years, but I do remember a giant monster film about a giant robot with legs that pivot up and down sucking people up in it like a giant vacuum cleaner as it moves along. Can you or anybody tell me the name of this movie? I thought of this today as I was cleaning up an ant invasion.

I'm pretty sure that the film in question is Kronos: Ravager of Planets, which features one of the more odd-looking robot designs to ever appear in a movie: best described as a cubist interpretation of a coffee table/lamp combo with television antennae on top. 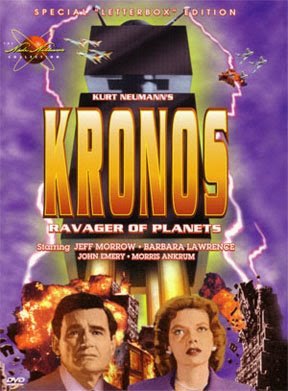 In the film, Kronos is a device sent by aliens to drain Earth of its various energy resources in order to reconstitute their own dying world; humanity further compounds the situation by attempting to fire a nuke at the machine, which causes it to become enormous. You can find a comprehensive and amusing write-up of the film here.

Need a giant creature identified? Do you have some fuzzy recollection of a city-destroying monster flick that you saw as a kid but have yet to track down any further info regarding it? Just drop an email to this blog (pantsofmystery@yahoo.com) and I'll commit a post to figuring out the identity of the creature in question and movie it appeared in. If I can't come up with an answer, I'm sure that some of the regular visitors here should be able to help via the "comments" section. 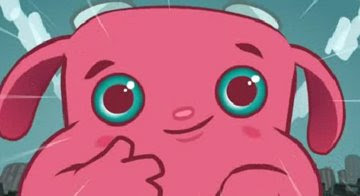 Blog reader Benjamin has once again brought a daikaiju-related item to my attention that slipped past my radar: "Bana Panic", a light-hearted animated web cartoon about giant monsters from Highlander Productions. The website describes the series thusly:

It's sunny, it's cheerful and the beaches are great!

But not is all that it seems... the citizens try to go about their daily business while avoiding destruction and mayhem on an epic scale as huge, adorably cute and ultimately stupid monsters go about THEIR daily business, wreaking havoc and leaving a trial of debris in their wake.

The first episode is up and it's very fun and well-produced- the story may seem a bit unfocused and a little surreal at first, but stick through to the end for the punch line and the whole thing will make sense. I look forward to more! Check out the site and the first episode here:

Posted by Mysterious Pants at 4:53 PM No comments: 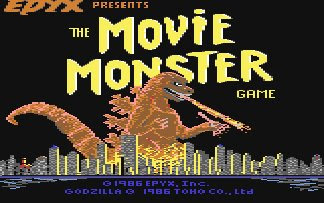 Earlier this week I was perusing Lemon 64.com- an archival website dedicated to the games library of the old Commodore 64 computer system- when I came across an entry about one of the earliest giant monster video games I had ever played: The Movie Monster Game. 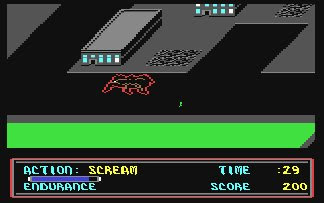 It’s a pretty simple and clunky game by today’s standards, but for its time it was fairly decent. The player was given the choice of a creature to control, a famous city to wreck and specific objective to accomplish. The real kicker though, was that the publisher not only actually managed to secure the licensing rights for Godzilla to be used as a playable character, but also kept his appearance relatively faithful to his proper Japanese design (okay- within the admitted limits of the C64’s graphical capacity. Nevertheless, the box art and game title screens are decently Japanese-accurate). 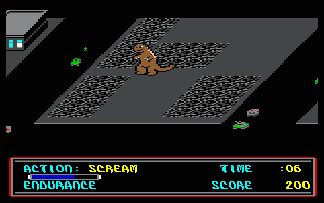 Pulling off this legal accomplishment was probably fairly expensive, which might explain why the rest of the monsters in the game consisted of knockoffs: a giant tarantula named “Tarantus”, a green blob called “The Glog”, an enormous wasp known as “Spectra”, the giant robot “Mechatron” and “Mr. Meringue”- an obvious counterfeit Stay-Puft Marshmallow 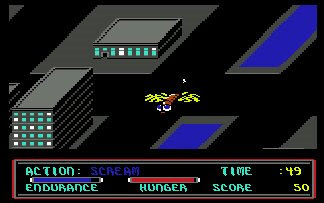 The actual play experience was kind of weird in that the monsters were not terribly durable and would expire pretty quickly, especially once the military showed up. This was due to each monster’s “Endurance” bar having the dual purpose of representing health AND for performing actions. Destroying a building meant repeatedly walking into it... which would cost Endurance each time (the larger the building, the more hits it required to collapse it). Using a monster’s signature special attack (like Godzilla’s breath weapon)... would cost a good chunk of Endurance. Being hit by military attacks... would drain Endurance. The math was definitely not on the player’s side by any stretch. If memory serves, stepping on civilians would restore your health but the actual amount was pretty minor and as none of the monsters could move terribly fast, it wasn’t a reliable method to stay alive. In a roundabout way, the strongest character out of bunch actually ended up being The Glog; its special attack was acidic skin that could slowly destroy a building with a single tap, thus excusing the need to slam into said target repeatedly (and exhaust Endurance in the process). 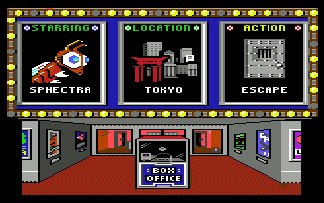 A nice touch was that each game would bookend with a quick sequence inside a movie theatre, complete with opening and closing credits, playing into the idea that the game itself was actually a film being watched by an audience. It’s a theme that would resurface again years later in the War of the Monsters game, which featured a menu based around a drive-in movie theatre lot.

Overall, The Movie Monster Game wasn’t anything terribly spectacular, but certainly well-intentioned and does have the distinction of being one of a small handful of giant monster-themed games to exist for PC’s. Ah, nostalgia!

Posted by Mysterious Pants at 5:05 PM No comments: 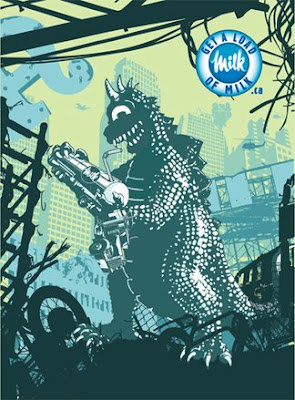 I recently came across this poster displayed in a bus shelter near where I live. Apparently even daikaiju understand dairy's importance as part of a healthy diet.

Posted by Mysterious Pants at 3:54 PM No comments: 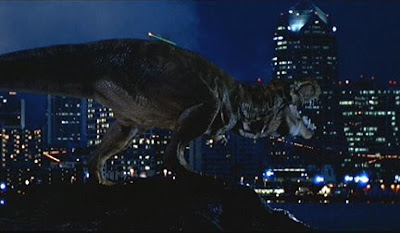 If you were to make a list of giant monster movies, would you also include films which feature dinosaurs? One could argue that a dinosaur put into a modern setting could be considered a “monstrous” creature. Many consider the original Lost World film from 1925 to be a pre-cursor of the giant monster genre as it was the first to feature an enormous beast (in this case, a brontosaurus) wreaking havoc in an urbanized environment. Even Godzilla in his first movie appearance was treated more as an ancient dinosaur of a previously unknown species verses a wild mutation. 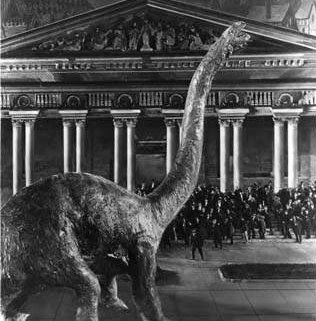 Personally speaking, I am hesitant to categorize dinosaurs- even within the framework of causing mayhem in current day- as giant monsters. The very definition of the word ‘monster’ refers to something that is unnatural or abhorrent; dinosaurs, while definitely strange in appearance, are still members of a once naturally-occurring animal species. An elephant is a large and odd-looking creature too, but I would similarly never classify a movie about a rampaging elephant as a giant monster film (that is, unless it was an undead, alien-possessed elephant). 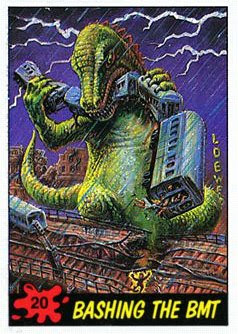 This seems like an odd position for me to take considering that a little while back I committed a post to the Dinosaurs Attack! Trading cards; but as said dinosaurs were mostly portrayed with zero scientific correctness and fantastical exaggeration, it gets around my “animals verses monsters” stipulation. Understandably, most portrayals of dinosaurs in film outside of documentaries are often inaccurate to some minor degree, but I’m referring here to wild, science-defying embellishment that treads into the realm of the fantastic. 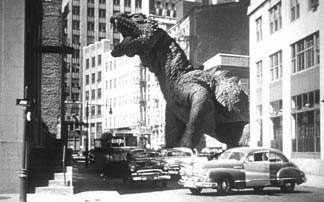 This also extends to fabricated dinosaurs like the Rhedosaurus from The Beast from 20,000 Fathoms. Even though the creature is supposed to be a member of a “real” species in the film’s story, the Rhedosaurus is clearly an imaginative creation despite its context.

I suppose that the bottom line here is that (for me, anyway) giant monster concepts need some sort of fantasy/sci-fi component in order to properly qualify as such. Dinosaurs are ultimately too grounded in reality to count, but that’s just my own little opinion.