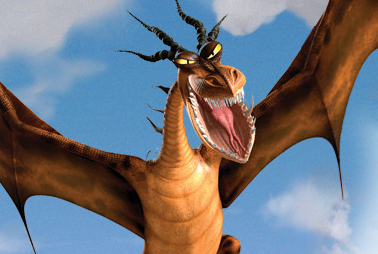 There are a couple of upcoming animated movies with giant monster content heading to theaters, although just not anytime soon. First up is Dreamworks’ next 3D feature called How to Train Your Dragon, an adaptation of a children’s novel by author Cressida Cowell. The plot involves a teenaged viking named Hiccup who meets and befriends an injured dragon... which would be less of a problem if Hiccup didn’t live in a village of warriors whose predominant occupation involved battling said monsters. Apparently there have been some concerns from fans of the books that the film is taking some unwanted liberties with the story, such as adding new characters and changing the original plot. I’m sure more of this will come to light when the movie gets closer to its release date of March 2010. 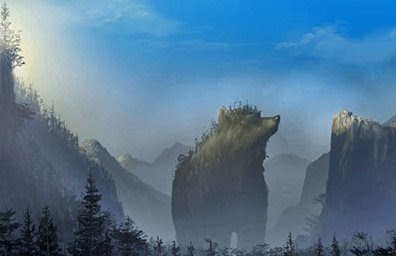 Twitch.com and I09.com both posted a brief news tidbit about an upcoming Danish animated film project, due out in 2011, called The Great Bear. According to the synopsis posted on both sites, the story is about an 11-year old boy named Jonathan, who laments having his younger sister Sophie joining him on his vacation to visit his grandfather. Things get worse when Sophie is spirited away by an ancient, gigantic bear which leaves Jonathan no alternative but to enter the vast forest where the creature live (along with other mythical beasts) in an attempt to rescue her.

Posted by Mysterious Pants at 9:34 PM No comments:

Monsters vs Aliens vs Television 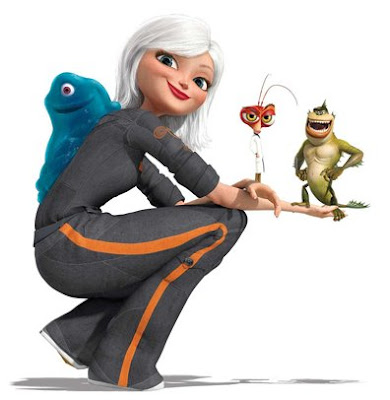 Despite mixed reviews, Dreamworks’ Monsters vs Aliens turned out to be a decent performer in the box office arena (almost 200 million domestically as of this writing, according to Box Office Mojo.com), so it’s no big surprise that the studio has green lit a television pilot for Nickelodeon to air next year. I’d imagine that the expensive celebrity voice talent won’t be used, however. One can only guess what the plot will involve, but it would be nice if the series cooked up some new 50’s B-movie inspired opponents for the characters to face off against. Is an episode featuring a giant mantis too much to ask for? Just sayin’...

Posted by Mysterious Pants at 7:46 PM No comments: 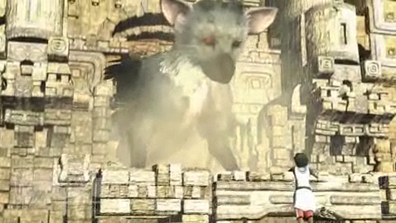 Here’s a teaser trailer for an upcoming video game by the same folks responsible for ICO and Shadow of the Colossus (two great PS2 games, BTW). There’s not much to go on in terms of what the game is exactly about, but I suspect that it might be an exploration-style adventure in the vein of ICO. The giant baby griffin will probably act as a support character that helps the player reach otherwise unaccessible areas. Nonetheless, color me interested!

I tried (unsuccessfully) embedding both a YouTube and Gametrailers.com video with the original version of this post, but the picture of the former kept getting cut off (I’ve noticed this issue with Blogger ever since YouTube switched over to a widescreen format) and the latter had some sort of HTML code problem and wouldn’t post at all.

Here’s the link to the Gametrailers.com site: Project Trico

And you can view it here in HD: Project Trico on YouTube

Posted by Mysterious Pants at 8:29 PM No comments:

Here are a couple of free online games I discovered recently; nothing deep, but good if you need to get rid of a couple of minutes (click on each title to go to said game). 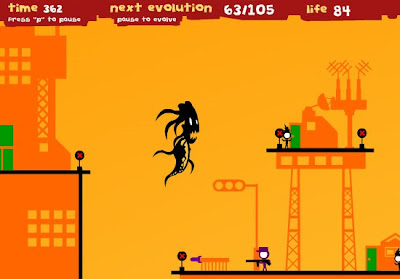 Run around and eat hapless stickmen, uh- people in order to change into larger and more versatile forms. Each transformation gives the player a couple of different choices with regards to what kind of monster they can become next.

Robot Dinosaurs That Shoot Beams When They Roar 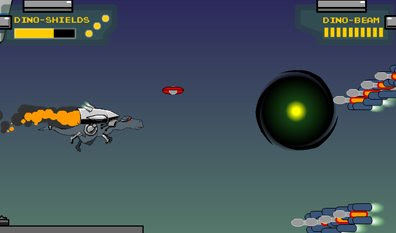 A fun but incredibly short game with the aesthetic of a bad 80’s cartoon.. and I mean that in a good way. Needs a longer sequel. ROOOOOOAR!

Posted by Mysterious Pants at 1:25 PM No comments: 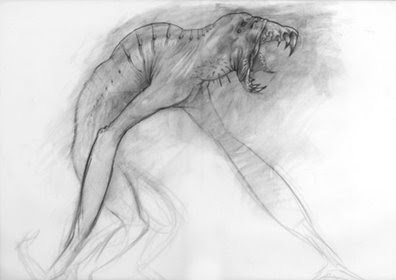 Even if you were lukewarm on the Cloverfield movie, this gallery of developmental artwork concerning the film’s monstrous antagonist- courtesy of the movie’s concept designer, Neville Page- is still pretty interesting nonetheless. It seems like the creature was always intended to be a weirdly-jointed, spindly-armed critter, but it’s neat to see some of the earlier versions of its evolution. 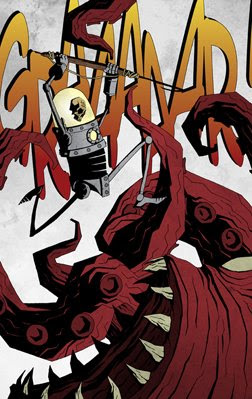 Meanwhile, over in my email’s inbox, I received some promotional material for an upcoming comic book called Robot-13 from Blacklist Studios. The concept is wonderfully nifty: an amnesiac robot with a floating skull for a head goes on a journey of self-discovery while indulging in its relentless compulsion to battle giant monsters that threaten humanity. Sold!

The Robot 13 MySpace page, along with some additional sample pages from the book, can be found here.

Finally, some random web surfing over the weekend unearthed this bizarre but entertaining music video for the song “Ninja High Schooool” by the band Peelander-Z (with help from Kaiju Big Battel).

Posted by Mysterious Pants at 7:46 PM No comments: 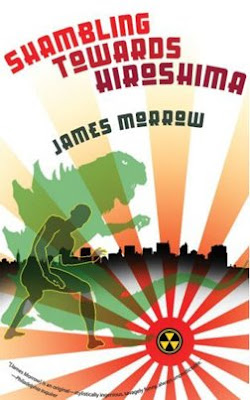 I recently took a job that requires a short commute to and from work and while partaking in public transit is certainly nothing to get excited about, I do relish the opportunity it has given me to catch up on my backlog of reading. The first book I sunk my literary teeth into was the short novel Shambling Towards Hiroshima by James Morrow. The plot is both unique and amusing; during the summer of 1945, representatives from the U.S. Navy approach Syms Thorley, a successful B-movie actor, with an unusual proposition. They want Syms to star (by way of donning a rubber suit) in a special film and stage production wherein Japan (by way of a miniature set) is destroyed by the fire-breathing monster, Gorgantis. As it turns out, the American military has actually created giant, mutant lizards and are poised to unleash them onto the unsuspecting Japanese populace: the movie’s true function is to act as a “what if” scenario in order to intimidate the Japan into peacefully surrendering. If Syms’ performance is anything less than convincing, countless innocent civilians will be destroyed in the destructive wake of rampaging, monstrous iguanas.

One point that should be addressed right off the bat about Shambing Towards Hiroshima is that this novel is not about giant monsters per se, but rather, giant monster MOVIES. It's easy to make that assumption, especially given how the synopsis comes across. Yes, there are enormous, dinosaurian lizard creatures in the story, but they’re merely plot devices. The real focus of the novel is the world of sci-fi/horror films; the people that create them, act in them, the fans, the politics and the egos. Morrow is certainly familiar with this particular corner of Hollywood, as references are scattered throughout the story- even some real world filmmakers like Willis O’Brien and Sam Katzman show up in supporting roles.

Shambling moves along at a decent pace and the lead character is a very well-rounded and amusing narrator (the book that we’re reading is basically Syms Thorley’s memoirs). Morrow frequently plays around with the theme of juxtaposing the fantastic against the pedestrian, which really helps to ground and humanize the story; in an amusing reversal, the mundane dilemmas and obstacles surrounding the portrayal of the “fake” monster Gorgantis end up being a more dire threat than the “real” monsters that are ready to destroy Japan.

I suppose that the novel’s biggest problem would be that casual readers not as well-versed in the whole sci-fi/horror film genre probably won’t get as much out the story as those who are up to speed on the jokes and references. It’s also a very short book, although I personally never consider that to be a shortcoming by any stretch (in fact, it helps to ensure that I actually finish reading it to completion before my lousy attention span fixates on something else). That being said, these are minor criticisms at best and in no way undermine an otherwise enjoyable read.

Posted by Mysterious Pants at 9:30 PM No comments: