Random observation of the day: is it just me or does the Kraken from the upcoming Clash of the Titans remake bear more than a passing resemblance to Orga, the alien monster from Godzilla 2000? 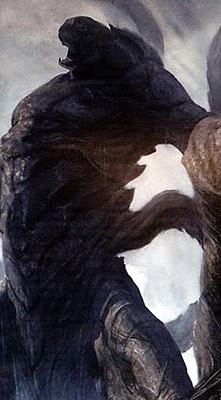 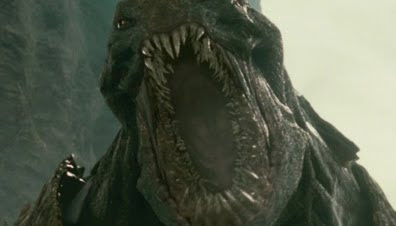 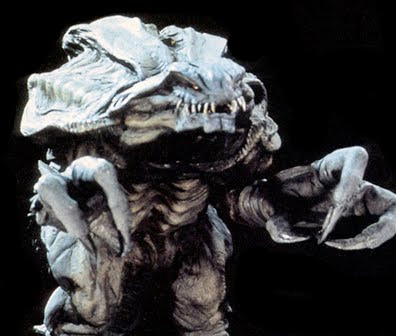 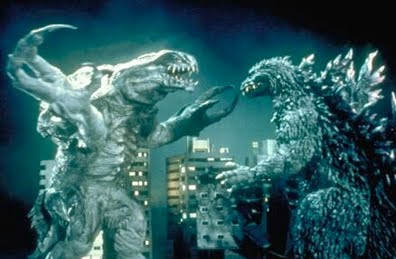 I’m sure it’s just a weird coincidence (Kraken sketch source: Dread Central). Perhaps if a battle with Godzilla could be arranged, we’d know for certain. 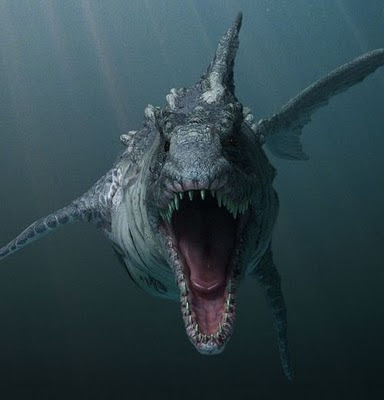 Normally, I don’t bother to cover stuff that has been thoroughly covered by Undead Backbrain or Robo Japan, but since I had been recently talking about Roger Corman’s Dinoshark film, I figured I’d post the one publicity shot of the creature that’s been circulating around the net as of this past week.

Truthfully, the design is not at all what I was expecting. I assumed, from the name, that the monster would be along the lines of a Tyrannosaurus with shark features; something that could chase people around on land AND in the water (basically, the Dinocroc again). Touché, Corman- you threw me a bit of a curveball, there.

The plot of the movie, as revealed by Corman himself on io9:

Global warming causes the glaciers to break apart. We start the picture with real beautiful shots of the glaciers falling into the ocean. The unborn egg of the Dinoshark that has been frozen for millions of years is released.

Is it just me or are the Arctic and Antarctic circles a minefield of trouble waiting to happen? There seems to be a reoccurring theme in giant monster films wherein something horrible thaws out of an iceberg and then goes to town on humanity. A strong message for environmental conservation as I’ve ever heard. Dinoshark makes its SyFy Network premiere on March 13th. 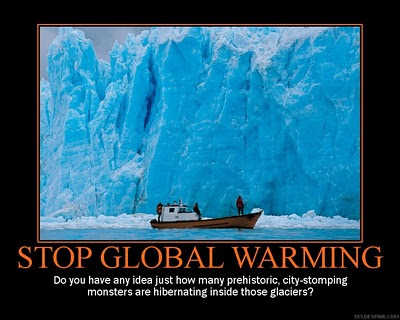 Posted by Mysterious Pants at 8:54 AM 2 comments: 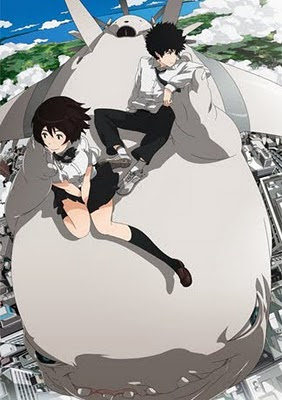 Some time ago, I reported on a “home brew” (i.e., mostly the effort of a single, incredibly determined animator) anime short film called Cencoroll- the story of a girl and a boy and his pet shapeshifting blob monster. I was delighted and surprised to discover that the finished product had been recently uploaded to YouTube and with English subtitles to boot. As is always the case with YouTube videos, enjoy it now before it gets yanked.

Earlier today, io9.com reported that the SyFy Channel has apparently greenlit the film Sharktopus. The movie will be directed by Roger Corman, who- waitaminute... Corman? Wasn’t he working on a production called Dinoshark? Has that been finished yet? Does this mean we’re eventually going to see a Sharktopus vs Dinoshark film (following the pattern set by the upcoming Dinocroc vs Supergator)?

Admittedly, Sharktopus is not much more than a title and a vague idea at this point in time, according to io9 article. The picture at the head of this post is some concept art by a fellow named Matt Leach but it may not represent the final design of the creature or even how big it will be, for that matter; it’s entirely possible that the monster might end up being human-ish sized. That would be a shame.

And to Karen O’Hara, director of the SyFy Channel’s original movies- if you’re willing to produce a movie about a half-shark, half-octopus beastie, might I perhaps interest you in a little idea called Dinobear? Half-bear, half-dinosaur... just throwing it out there... 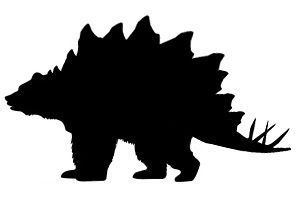 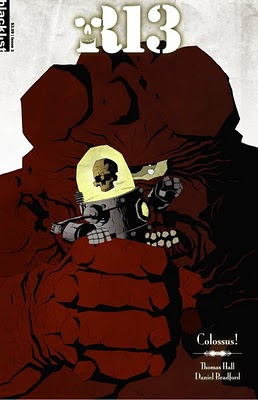 I had a pleasant surprise waiting in my email inbox today in the form of some preview pages from the third issue of Robot 13: the “amnesiac, skull-headed robot verses giant monsters” comic book. The release date is March 10th but if your local comic store is run by elitist jerks, you can always order a copy from the publisher’s website.

I wish that Hollywood would make a movie version of this thing already. 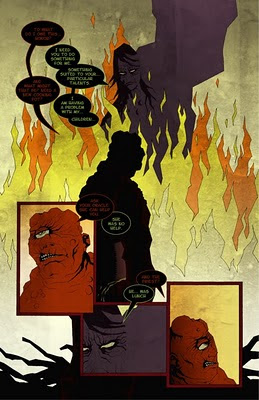 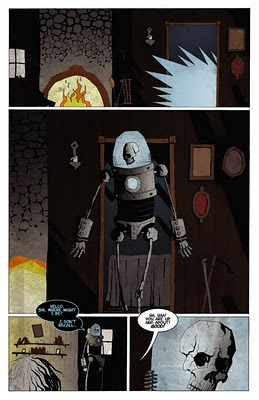 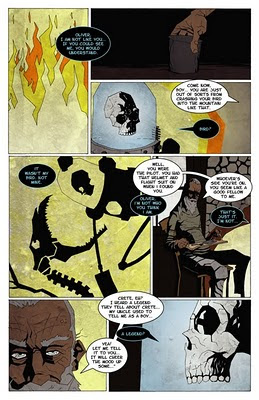 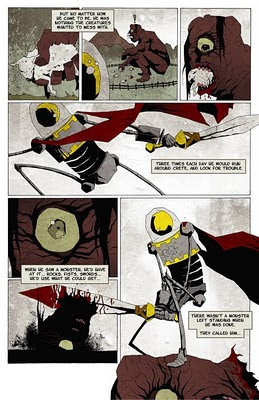 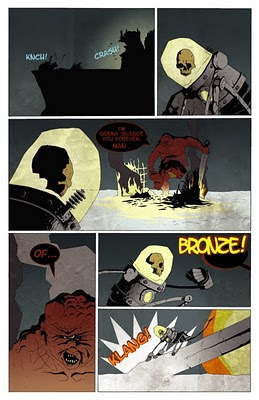 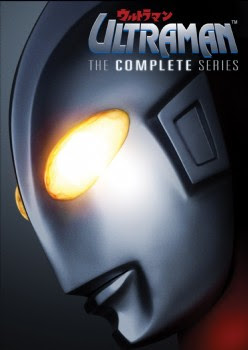 Hey there, Ultraman... sometimes I feel as if I owe you an apology. Despite my fixation with the giant monster genre, I never really embraced your franchise in any sort of significant capacity. While I do have a working knowledge of your various television incarnations and rogues gallery of enemy monsters, I’ve never actually sat down and watched any of your series from beginning to end. I don’t even have a decent reason for this, either. Perhaps it’s simply because you were never ingrained into my psyche back when I was a wee, impressionable lad- the original 60’s program actually aired in North America back in the seventies, but not on any of the channels where I lived. 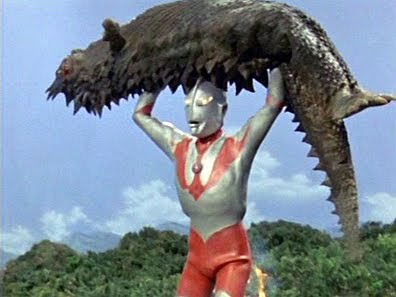 As it turns out, one of my Christmas gifts this past year was a DVD set of the very first Ultraman series, thus ridding me of an excuse to not finally get acquainted with the show. All the same, this was a somewhat tricky review to write because, well- it’s a children’s show from the '60s. The episodes are pretty formulaic and the special effects are exactly what you’d expect from a television-budgeted production from that era. That being said, I did find it entertaining all the same.

The story for the uninitiated: in the distant, futuristic world of the (ahem) 1990s, marauding giant monsters and invading aliens are commonplace enough to warrant the creation of the Science Patrol- an international defense organization whose members are outfitted with all manner of high-tech gadgetry and vehicles. Shin Hayata, a Japanese Patrol agent, is out investigating the appearance of flying spheres of energy when one crashes into his ship, completely destroying it. The end. 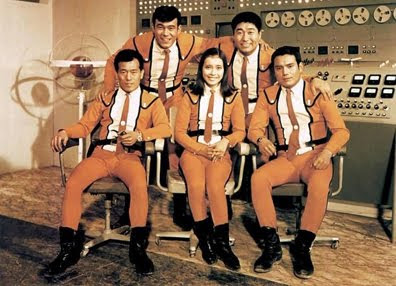 Well, not quite. The UFO is actually a method of transport for a gigantic being from space named “Ultraman”. To atone for the accident, the alien merges his life essence with Hayata’s, reviving him from the brink of death and leaves him with handheld cylindrical device called the Beta-Capsule. By pushing a button on the top of said mechanism, Hayata can transform into Ultraman whenever the need arises (although the change seems to be more akin to the two switching places). However, because the Earth’s atmosphere is not terribly compatible with Ultraman’s extraterrestrial physiology, he can only do his thing for a few minutes before his energy levels extinguish. 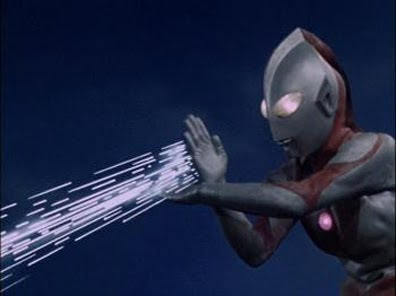 Most episodes tend to follow a strict formula of the Science Patrol coming across an alien or monster and failing to deal with the problem until Hayata finally becomes Ultraman and disposes of the threat. This repetition is to be expected of a kid’s program, but at the very least the series had the common sense to mix around the motivations of the various creatures for variety instead of a slew of enemies that were evil just for the sake of it. In fact, to be brutally honest, the monsters are real stars of the show. Ultraman himself? There’s really not much to him. He’s sort of like Superman; so all-powerful that he ends up being rather uninteresting. In the few instances where the monster of the week didn’t go down like a sack of potatoes during the climactic fight, I was actually thankful for the break in convention.

While the effects work is pretty representative of low-budget, rubber suit techniques, the show does deserve props in terms of raw ambition; the sheer amount of costume and miniature work (even with the obvious production shortcuts) was something that most American sci-fi shows being made around the same time weren’t even remotely attempting. 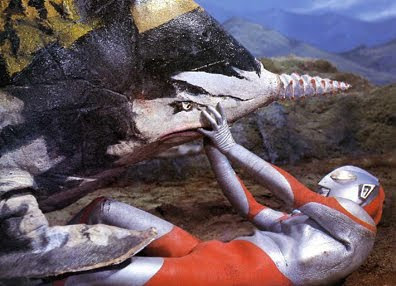 Overall, the DVD picture quality was passable at best (noticeable video resolution “lines” appear whenever stuff starts moving around quickly), but the English version audio track was downright awful in terms of audio quality. Perhaps a decent quality version was unavailable but after a few episodes, I switched over to the Japanese track and watched the rest of the set with subtitles.

So now that I’ve had a taste for the show, will I be seeking out more? Hard to say. Although I found all the various daikaiju and fighting to be fun romp, it didn’t take long for the repetitiveness of the stories to start wearing thin on me, so I don’t think that sitting through any of the sequels at this point in time would further endure me to the series as a whole. I suspect that my enjoyment of the character may simply remain along the lines of conceptual appreciation more than anything else, but that opinion may very well change with time. My brain is funny like that.

Three and a half out of five.