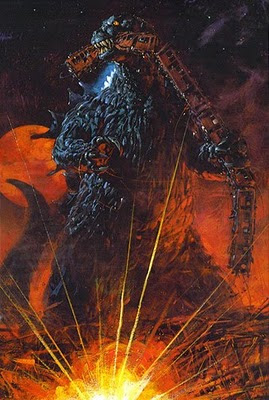 From Variety (with thanks to Benjamin for the link!):

"Godzilla" is coming back -- this time, with Legendary Pictures taking the lead, co-producing and co-financing with Warner Bros. for release in 2012.Legendary announced Monday it had obtained rights to the iconic monster character from Japan's Toho Co., which has overseen more than 25 "Godzilla" films. Toho will release the pic in Japan.

Legendary said it's planning to announce a director shortly.

In addition to Legendary, producers on the new film will be Dan Lin, Roy Lee and Brian Rogers. Yoshimitsu Banno, Kenji Okuhira and Doug Davison will exec produce.

"Godzilla is one of the world's most powerful pop culture icons, and we at Legendary are thrilled to be able to create a modern epic based on this long-loved Toho franchise," said Thomas Tull, Chairman and CEO of Legendary. "Our plans are to produce the Godzilla that we, as fans, would want to see. We intend to do justice to those essential elements that have allowed this character to remain as pop-culturally relevant for as long as it has."

Legendary noted the film will fall under its co-production and co-financing deal with Warner Bros. Legendary's productions with Warners have included "The Dark Knight," "300" and "The Hangover."

Speculation about a new "Godzilla" has been active since last summer. The Bloody Disgusting web site reported in August that the project was in development.

I originally refrained from reporting on this news tidbit a few months back when it was just an internet rumor, but it seems to have become nice and official. I’m a wee bit concerned that Yoshimitsu “Godzilla flying by means of using his atomic breath like a rocket is a good idea and not at all asinine” Banno is attached to the project in executive producer capacity, but I suppose I shouldn’t get too worked up when a director hasn't even been chosen as of yet. The fact that the intention is to create a Godzilla movie that will appeal to fans of the character does fill me with hope, however.

In non-Godzilla-related news, I came across this today:

Looks like somebody really liked the design aesthetic of the Michael Bay Transformers movies- it’s still awfully neat, though. Supposedly, this is only test/teaser footage for a proposed “Gaiking” movie by director Matthew Gratzner and F/X artist Jules Urbach. The film is also aiming for a release in 2012 with a possible sequel, Shogun Warriors, provided the box office returns are plentiful enough. It’s interesting to note that the American “Shogun Warriors” toy line from the 70’s was comprised of Japanese giant robot characters which all hailed from different anime and manga series- it would not surprise me if this film doesn’t end up being an adaptation of the original Gaiking animated television show but instead, goes with an entirely new story concept. 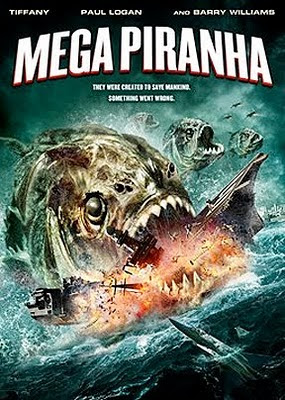 With the upcoming Sharktopus film being the media darling of science fiction/geeky websites over the last few weeks, I wondered if the SyFy Channel would be planning any additional jaunts into giant monster territory with regards to their home-brewed productions. According to a recent news post over at Dread Central.com, the answer is apparently a big, fat “yes”. A list of their upcoming original movies revealed a couple of notable entries.

In the “Possibly Giant-Sized Monsters” category:

Mega Piranha- An unusual alliance tries to stop a mutant strain of giant ferocious piranhas that have escaped from the Amazon and are eating their way to Florida. This film actually premieres next month on Saturday, April 10th. (I’m not certain how “giant” the “giant piranhas” actually are, given that a normal example of said fish is a tad larger than your hand and no- I don’t necessarily believe what’s portrayed in the poster/DVD box cover design above. That might just be a red herring- uh, no pun intended).

Mongolian Death Worm- A treasure hunter who has been searching for a tomb containing Genghis Khan's treasure teams with a humanitarian UN health worker to stop the Mongolian Death Worms, awakened by experimental oil drilling in the Mongolian desert. Premieres Saturday, May 8th (Again, I don’t know if the film’s interpretation of the infamous cryptozoological critter is going to make them larger than their purported size, but it’s entirely possible).

Lake Placid 3- In this sequel, a game warden, his wife and their young son move into their aunt's cabin on Lake Placid, where the lonely boy starts feeding baby crocodiles he views as pets. Three years later, the crocs start looking at him and his family as their food (The original movie featured a larger-than-normal crocodile, so it might be the same case with this newest entry).

In the “Definitely Giant-Sized Monsters” category:

Frost Giant- Dean Cain battles a giant unfrozen Nordic frost giant (Is it wrong that I’m rooting for the monster in this one?). 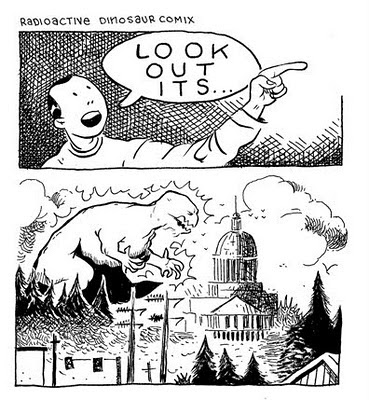 Here’s a neat little comic blog I stumbled upon recently which pretty much delivers what its title promises. The site has only just started up, so its too early to tell yet if a deeper story is waiting in the wings or if the series is merely a visual exercise in chronicling the actions of a giant theropod as it flattens various urban sprawls. I’m good either way. Go here for more:

Posted by Mysterious Pants at 9:36 PM No comments: