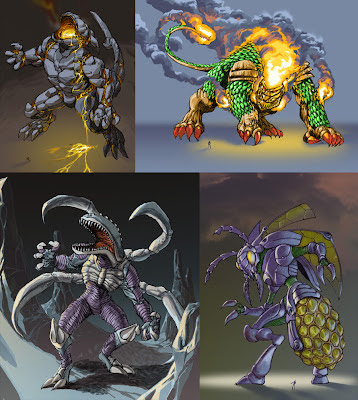 If you’ve been keeping up with either SciFi Japan or the Giant Monster Blog, you’ll have probably already read about Atari’s proposed “Monster Vote” for the upcoming Godzilla: Unleashed game. IGN has set up an online poll wherein you, the intended consumer, can cast a vote for one of four original creations designed by Pipeworks conceptual artists. The monster with the most votes will appear as a playable character in the finished release.

In my earlier blog entry about Godzilla: Unleashed, I mentioned my distaste for when earlier Godzilla games would feature multiple versions of a given character. This decision to use an invented creature in the lineup of playable monsters is simply a different flavor of the same problem: it makes for one less Toho creation that could’ve potentially appeared in the game.

These original monsters aren’t horrible in and of themselves, but I just don’t feel that any of them are a particularly decent aesthetic “fit”. If you were to showcase a handful of Japanese daikaiju and included one of these new creatures in the group, it would stick out like a sore thumb. These designs would almost seem more at home adorning the cover of an old Marvel monster comic book, comparably.

If Pipeworks were to release an independent giant monster game that featured a menagerie of their own made-up beasts, that’s fine (in fact, I’m all for it)- but I’m buying a Godzilla game to see Godzilla characters. Please don’t give me “Lightning Bug” when I could be playing King Caesar.

Twice the horror! Double the spectacle! 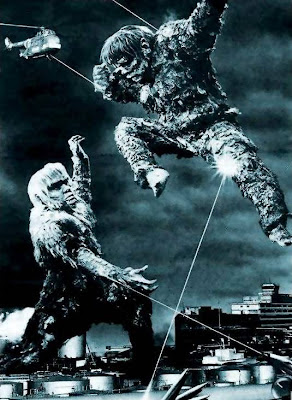 It appears that I’m not the only one with a propensity for combining giant monsters and online blogs, as you can see by following this link (and he had the idea for long before I did!). You can never have too much giant monster online goodness, as far as I’m concerned. 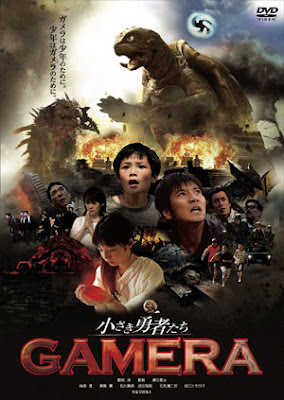 For the uninitiated, Gamera originally hailed from a series of films produced by the Japanese film company Daiei as an attempt to cash in on the success that Toho was enjoying with their Godzilla movies. Gamera himself is rather unique creation amongst other daikaiju in that he is a giant, monstrous turtle, but more notably because of his ability to fly by way of pulling his limbs into his shell and projecting fire/energy outward through the holes which propels him through the air like a spinning top. Yeah, you read that last sentence correctly. 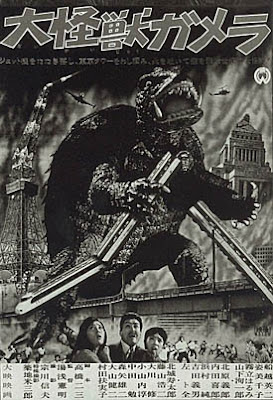 Gamera was introduced in the original batch of movies (from 1965-1980) as a prehistoric, fire-breathing turtle capable of flight (that sound you’re hearing is paleontologists’ heads exploding worldwide) that was awakened to modern day by an atomic weapon. He quickly went from pissed-off menace to “the friend to all children”, saving danger-prone Japanese tots from a variety of bizarre creatures, both Earth-based and alien. Despite the campy nature and kid-friendly tone of the films, they often featured oddly violent imagery that went beyond what was seen in other monster movies made around the same time (dismemberment and copious amounts of strangely-colored monster blood were not uncommon sights in the series). 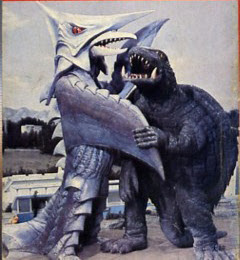 During the 90’s, Gamera appeared in a film trilogy that re-imagined the character as ancient, genetically-engineered species of guardian creature created by the denizens of the lost city of . These movies were much more straight-forward and serious than their earlier counterparts (in fact, each film becomes darker than the last) and considered by the many fans of the genre to be superior to the Godzilla films that were released during the same period. 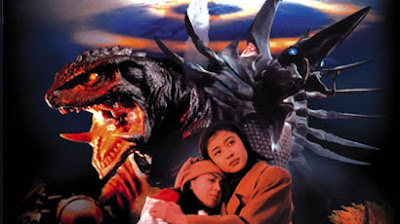 Gamera: The Little Braves sees the franchise return to its original roots in a film aimed squarely at a younger demographic. It’s a questionable maneuver, considering that the Heisei-era Gamera movies are an already considerable act to follow, although this decision may have been motivated by the mediocre box-office performance of the third and final entry of the 90’s films, Awakening of Irys.

The movie starts out with a young boy from a seaside village in 1973 witnessing a fight between Gamera and a handful of Gayos monsters. Unfortunately, the battle quickly goes sour for Gamera, so out of desperation (or possibly fatalistic laziness) he builds up his own internal energies to a critical level and detonates, taking out his opponents in the process. 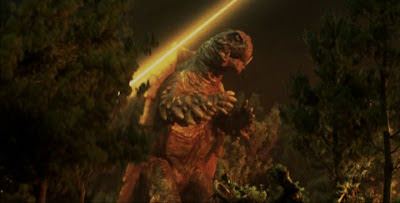 Flash forward to 2006 where the same boy has grown up, become recently widowed and runs a local restaurant along with his son, Toru. While playing with his friends on the beach, Toru notices a faint red light emanating from the remains of the island where Gamera had sacrificed himself decades earlier. There he finds a weird crimson rock with an egg set in the middle which, upon being picked up, hatches out a baby tortoise. Toru names his new pet “Toto” and takes it home, careful to hide it from his father who has a strict policy against animals (and/or juvenile monsters) in his house. Toto immediately begins displaying traits that are uncharacteristic of his apparent species, including rapid growth and the ability to fly and belch out tiny fireballs. Toru’s next-door neighbor Mai speculates that Toto might in fact be a new Gamera in an infant stage, but Toru is quick to dismiss the theory; he doesn’t want to believe that Toto could become a gigantic, destructive beast that could obliterate itself like the original did. Within a short amount of time, Toto becomes too large to effectively hide in the house anymore and is moved to an abandoned shack near the beach, but disappears from the location soon afterwards. 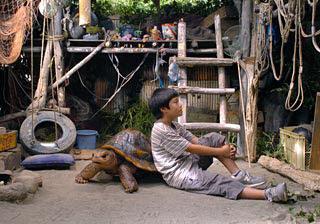 Toru barely has time to morn the loss of his friend when a new creature called Zedus wanders out of the ocean and begins chowing down on the terrified locals. The leviathan is quickly engaged by a further enlarged (but still smaller than his adversary) Toto who is finally beginning to show the traits of his giant monster heritage in his appearance. Despite his tenacity, this new Gamera is still far from being fully developed and gets thoroughly trounced; Zedus is eventually repelled, but Gamera is left exhausted and badly injured as a result. 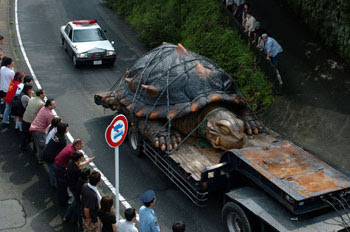 The military suddenly appears and carts Gamera away on a flatbed truck to a facility in the nearby city where they intravenously pump him full of a liquid version of the red rock that his egg was resting in, revitalizing him in time for a rematch with Zedus. Meanwhile, Toru and his friends realize that the strange rock that housed Gamera’s egg is actually the final component that will grant him his full strength and abilities. As the kids make their way into the city during the monsters’ battle to deliver the rock to Gamera, Toru’s father rushes to stop his son, worrying that the destructive event he witnessed as a child may repeat itself. 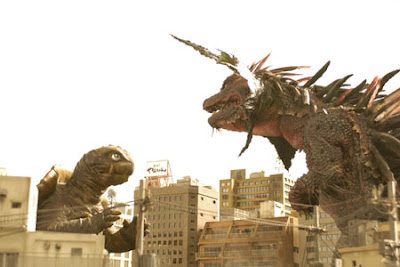 Although this latest entry is the Gamera series isn’t terrible, it’s not exactly great either. One of the biggest problems is that the giant monster stuff, aside from the brief opening sequence, doesn’t really kick in until almost 45 minutes into the film. While the human interest bits that play out in the meantime are far from horrible- Toru and his father are both fairly solid characters and the film isn’t afraid to go into the more sullen aspects of the loss that they’ve both suffered– the material does meander along at a leisurely pace and is a tad unfocused in spots (a subplot involving Mai undergoing a dangerous operation could have been easily excised from the story). In particular, sequences dedicated to the diminutive Toto’s antics as he adorably bumbles through a series of near misses with moving vehicles, kitchen implements or discovery by Toru’s father degenerate into an exercise in patience; it’s fairly obvious that the little guy is going to grow into Gamera, so there’s only so much time you can spend playing against expectation before it becomes somewhat annoying. When the giant monster action finally comes around, it’s admittedly pretty decent. The sets and effects are mostly good along with some occasional CGI embellishment. Zedus is a well-designed but rather uninspired opponent; resembling a spikier version of the Dilophosaurus from with an “extend-o tongue” similar to the one used by Barugon from the Shōwa era of Gamera films. His weakest aspect though, is that he has no substantial build up or explanation once he’s introduced into the story- he just sort of appears out of the blue seemingly because the plot demanded a second monster right at that moment. 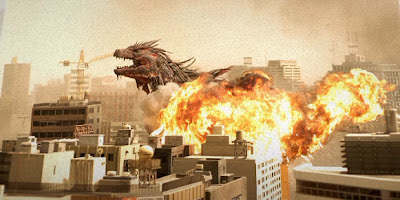 As for the “new” Gamera, the redesign is just a tad too cute for my tastes, personally speaking. I understand that in the context of the film, he’s supposed to be a juvenile monster, but it’s hard not to make comparisons to the more kick-ass incarnations seen in the 90’s movies. His new look makes me half expect to see pink cotton candy shooting out of his mouth instead of fireballs. However, should this film see any direct sequels it is possible that the design may change to something less cuddly-looking, keeping in step with the idea that he is maturing. What is inexcusable though is that his classic, trademark screech has been replaced with a sound bite from an old sound effects library; Gamera now shares the exact same bellow as “Spot”, the pet dragon that lived under the staircase in The Munsters television series. What’s up with that? 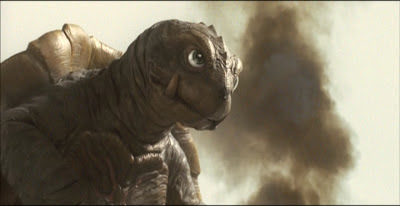 Gamera: The Little Braves is an average, albeit clunky first effort in a new direction but only recommended to curious monster movie enthusiasts and possibly very patient kids who can keep up with subtitles. 3 out of 5.

Posted by Mysterious Pants at 3:31 PM No comments:

When art imitates... other art

A friend of mine emailed me a picture of a cover for an upcoming Marvel comic which is clearly paying homage to a certain, infamous movie poster: 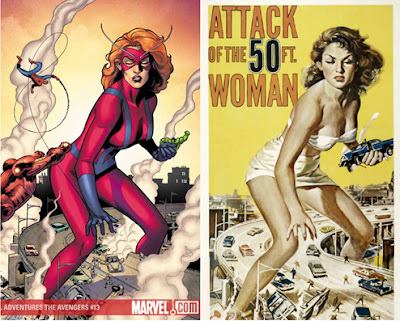 There’s another giant monster next-gen game coming out in 2007, this one for the PS3. Lair appears to be a weird cross between a fighting and war strategy game where you control a dragon rider and its mount- a winged, fire-breathing dragon- as you attempt to turn the tide of large-scale battles in the vein of the Lord of the Rings films. 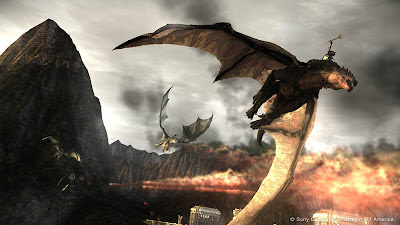 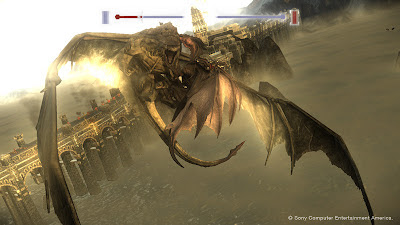 From what I’ve seen of various preview material around the net, this game not only looks fantastic, but has the potential to be a lot of fun. There are some cool game play elements like aerial battles with other dragons and the various tactics at your disposal that are used to thin out the enemy horde (knock them around, burn them to ash with fire breath or have your mount chow down on troops in order to replenish its own health) . There are at least three different “types” of dragons showcased in a demo that’s supposedly floating around, and the designers have mentioned that some other creatures will make appearances in the game (check out the picture below which features some kind of weird, bull-like monster). Nifty! 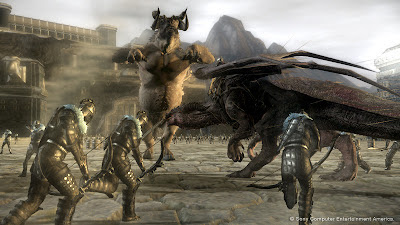 Posted by Mysterious Pants at 4:16 PM No comments: