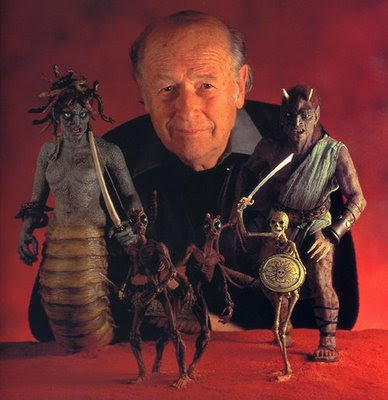 Ray Harryhausen, the man whose wonderful stop-motion creations played a significant part in shaping me into the giant monster movie-enthusiast that I am, celebrates his 90th birthday today.

Happy birthday, Mr. Harryhausen and thank you for all the awesome memories!

(Check out this little animated birthday wish by Mark Sullivan below. Very cool!) 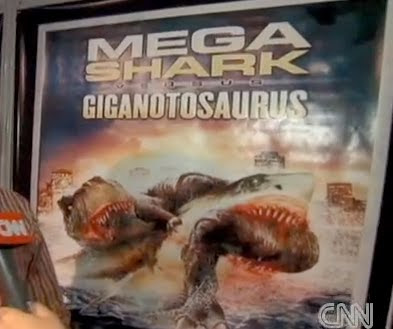 It looks like another straight-to-DVD horror is about to be unleashed upon the unsuspecting population. A somewhat condescending report from CNN on the Cannes Film Festival made brief mention of the upcoming Mega Shark vs Giganotosaurus movie from The Asylum; a sequel (of sorts) to their Mega Shark vs Giant Octopus film. While the poster art is pretty slick, I think that I’ll just keep my enthusiasm in check for the time being. Let’s not forget that Mega Shark vs Giant Octopus was a fun, over the top, monster-filled trailer. The actual movie? Not so much.

I also find the choice of monsters more than a little odd too, given that there isn’t a mutual environment where both adversaries could actually fight each other on equal terms. So... I guess the victor will be determined by which creature mistakenly crosses over into its rival’s territory first? Did Asylum come up with this idea by haphazardly choosing two names from a list of pre-existing computer assets from all their various productions?

Perhaps a better choice of title might be Battle of the Random Pairing of Computer Generated Models from The Asylum Special Effects Library.

Movie Review: How To Train Your Dragon 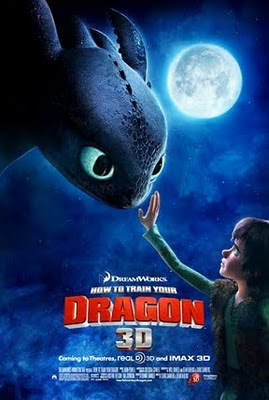 When I went to see How To Train Your Dragon, I’ll admit that wasn’t really expecting much; in the realm of computer-animated movies, my tastes sit firmly on the Pixar side of the fence than Dreamworks’ end. Even last year’s Monsters vs Aliens- a film that was practically channelling my geeky love of 50’s monster movies- did little to sway that bias, as I felt that the final product didn’t quite measure up to the sum of its core ideas. As it turned out, however, my initial assumptions were quite wrong- not only is How To Train Your Dragon a great movie, it’s arguably the strongest thing that Dreamworks studios has put out to date.

Despite being the son of a viking chieftain, teenaged Hiccup is rather lacking as a battle-hardened warrior. This shortcoming poses a bit of problem, given that his tribe has been locked in a generations-long war with fire-breathing dragons that regularly plunder the local livestock. Eager to prove his worth, Hiccup ventures out one evening during an assault on his village and manages to shoot down a fast-flying dragon with a home-made bolas cannon; unfortunately, without a body for proof, nobody believes his story. The following day, he tracks the incapacitated dragon- now unable to fly thanks to a damaged tail fin- to where it had crash landed in a nearby forest and identifies it as a member of a rare and deadly breed called a “Night Fury”. Despite what he’s been raised to believe about their dangerous nature, Hiccup takes pity on the creature and attempts to befriend it.

Slowly, a trust builds between the two and as Hiccup learns more about the dragon, he begins to realize that everything that he’s been taught about them has been filtered through fear and misunderstanding. Hiccup nicknames the Night Fury “Toothless” (because of its retractable teeth) and gives it back its means to fly by way of a prosthetic tail fin, as well as outfitting it with a saddle so as to accompany the dragon during its airborne excursions. Unfortunately, their friendship presents a new dilemma: as a dragon sympathizer in a village of people who would rather annihilate the species entirely, Hiccup is faced with the possibility that any attempt to share what he’s learned with fellow vikings would be grounds for banishment or worse.

I really enjoyed How To Train Your Dragon- while it’s not perfect by any stretch and perhaps a little formulaic, its overall charm easily paves over the shortcomings. Of particular note is that the movie actually feels like an evolutionary step for Dreamworks; it’s refreshingly free of pop-culture reference gags, blatant anachronisms or hit songs used as musical decoration, instead relying solely on straightforward storytelling for narrative and character moments for humor. The film also resists the lure of some of the more annoying oft-used animation tropes, like making the non-human characters a little too anthropomorphic. The dragons, while intelligent, are ultimately still animals and act as such: there were no smarmy cocked eyebrows or slack-jawed reactions to be seen and I was all the happier for it.

The overall aesthetic of How To Train Your Dragon is quite appealing with great designs for both the human and, particularly, the dragon characters. The movie actually throws a bit of a tease at the audience when Hiccup thumbs through an encyclopedia of dragon species, showcasing a bunch of what were possibly conceptual ideas that never made it into the finished film. Perhaps they’ll appear in a sequel, something which I definitely look forward to. Four and a half out of five.

Posted by Mysterious Pants at 7:54 PM No comments: