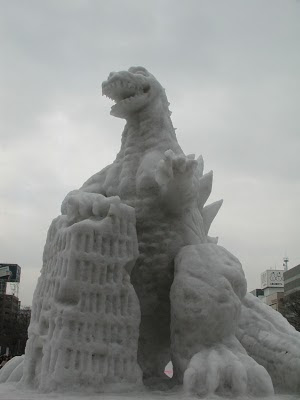 Well, my little monsters, it’s that time of year again. I’m going to take a little egg nog break until January, so in the meantime, have a good holiday season. See you all in 2010!
Posted by Mysterious Pants at 10:21 AM 4 comments:

One of today’s posts from io9 website featured these amusing giant monster parody posters, which were commissioned by the Center for Migratory Species and the United Nations Environment Programme. The ad campaign’s theme is to raise awareness of humanity’s negative impact on animal species. 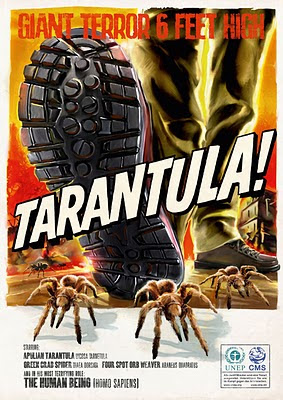 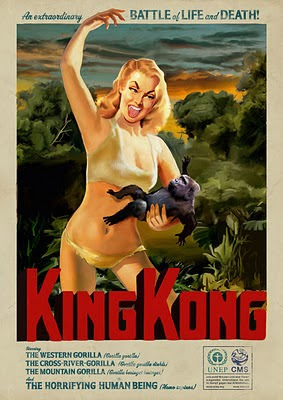 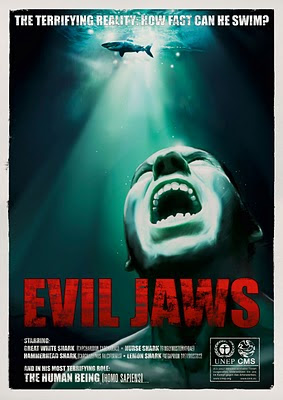 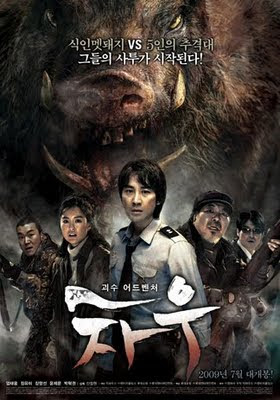 To be perfectly blunt: The Host, this ain’t. When I first heard about the Korean giant killer boar movie Chaw, I had hopes that it would follow more closely in the cinematic footsteps of the aforementioned film than, say, the unsatisfying D-War: Dragon Wars. While it might be unfair to compare the two, it’s kind of perplexing how a movie like Chaw can be made after something genuinely decent like The Host and yet, seemingly learned nothing from it. 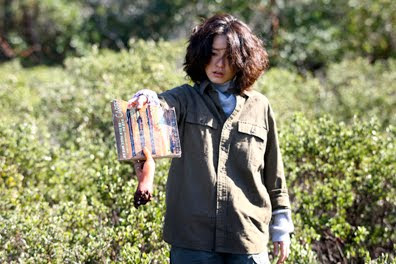 Police officer Kim Kang Su is hoping for a change of pace from his stressful existence in Seoul when he is transfered to a quiet, forest village but arrives just in time to be assigned to a case involving the discovery of the dismembered remains of a young girl. The girl’s grandfather, an retired hunter, is convinced that the perpetrator is actually a wild boar with a taste for people. Before long, the entire community becomes focused on finding the creature, unaware that it’s an even greater problem than they initially suspected. 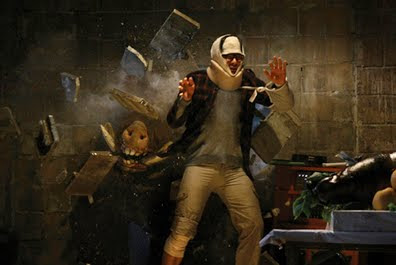 Before I go any further with this review, I should mention that the DVD copy I watched was a Chinese version with spotty english subtitles, so a lot of the plot details ended up lost in a sea of lousy translation. Unfortunately, this also proved to be particularly problematic with regards to the humor in the film, as Chaw is meant to be an intentional horror/comedy outing. I can’t help but wonder if my final opinion is somewhat tainted by the fact that I missed out on a lot of the jokes- well, the dialogue-based ones, anyway. Nonetheless, it was pretty obvious where the film would dip into lighter moments and, to be truthful, I simply found it more forced rather than funny whenever it did. 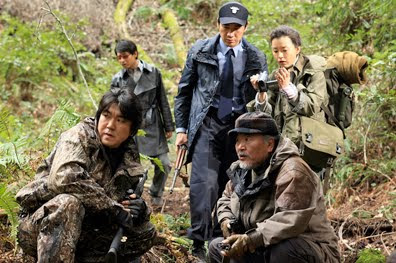 And therein lies my key problem with Chaw: it’s as if the filmmakers seemingly couldn’t decide on what to do with regards to both tone and content. The story alone felt like it could have used some trimming in terms of the number of characters and weird little subplots that just end up going nowhere. All the extra fat in the script might also explain why the killer boar itself is barely in the movie for the first hour; when it finally does show up, it’s only for a brief sequence before disappearing again for another twenty minutes until the movie’s climax. Be it for reasons of room or budget, the creature’s absence probably wouldn’t have bothered me as much if its threat was a little more omnipresent. Even as the various characters wander around in the woods (particularly during that first hour), it never really feels as if the boar could come barreling out of the shadows at any given moment. 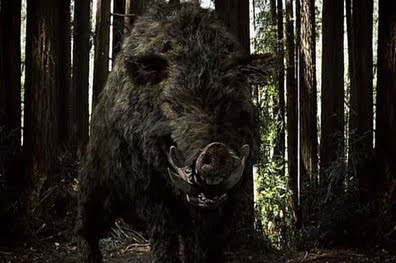 On the special effects end of the spectrum, the CGI (and occasionally animatronic) work used to portray the boar is decent for the most part, especially considering that the film had nowhere near the budget of a Hollywood blockbuster. Granted, computer-generated fur still has a little ways to go in terms of being 100% convincing (unless you’re able to throw tens of millions of dollars at it), but at the least the movie had the sense to keep most of the boar sequences in low light to help hide the shortcomings.

To sum things up, if you’re looking for a monster romp, you might want to look elsewhere. The imbalance of humor and horror in Chaw didn’t quite gel with me, even though I firmly believe that the two genres can be successfully merged together (as in the case of Tremors, for example). I think the biggest problem was that I went into the movie expecting a main course of monster pig but instead got servings of lame duck humor- that’s not a decent meal in my book, unfortunately. Two and a half out of five.