This past weekend, I stumbled upon this amusing animated short which turned out to be an entry for a fake film trailer festival called “Teaserland”. Mimicking the style of a 70’s exploitation movie, Silicon Monster Hits Town tells the sordid tale of a group of confident women who resist the efforts of a towering blob monster out to make the female populace well-endowed (the fiend!). It’s a neat, well-animated piece executed in a style that somewhat reminds me of the 90’s MTV series, Aeon Flux. Antonio Santamaria, an artist who worked on the film, posted some storyboard samples and character designs on his blog, which can be found here.

A Boy and his Morphing Blob Thing 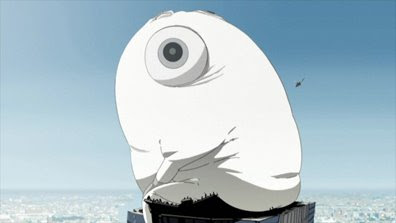 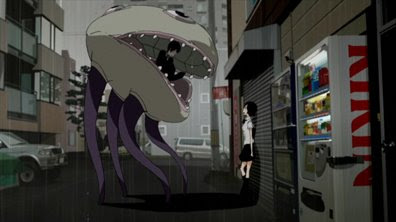 Over the last week, some buzz about an independent Japanese animated film called Cencoroll has been making rounds on anime-related news sites. The story is about a quiet community that is thrown into chaos when a strange, giant creature appears on the top of a building in the middle of town. Yuki, an inquisitive young girl, wonders if the monster is connected to a young boy named Tetsu who keeps a bizarre, shapeshifting creature named "Cenco" as a pet. When a stranger who seems to have control over the larger monster arrives in the town, Yuki finds herself caught up in a battle between the newcomer and Tetsu with their respective monsters acting as the weapons of choice. 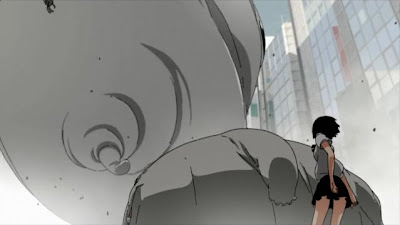 One particularly impressive aspect to the project is the fact that its a solo effort; Atsuya Yuki, the movie’s creator, apparently directed, designed and animated the film almost entirely by himself. Sheesh! And here I am, thinking that updating this blog once a week is ambitious...

The film’s website, along with a trailer, can be found here: Cencoroll 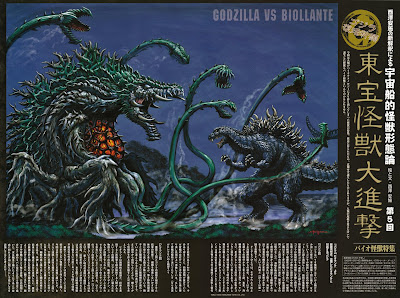 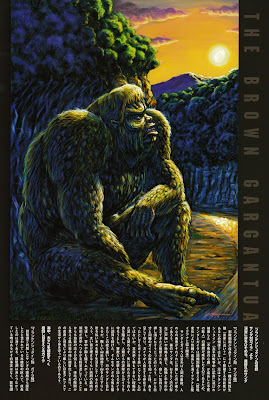 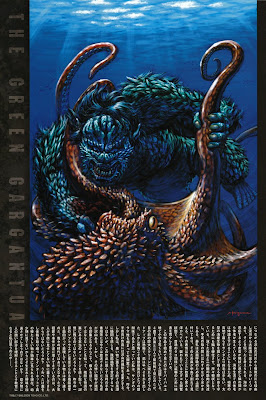 The spring 2009 issue of Space Magazine Uchusen has served up some monster art pieces depicting a stand-off between Biollante and Godzilla,  a contemplative Brown Gargantua and a giant octopus-fightin’ Green Gargantua. Enjoy!

Posted by Mysterious Pants at 10:07 PM No comments: 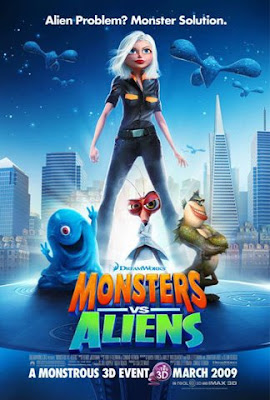 Last year, I posted two articles about the film Son of Kong and used it as an example of a movie that, while full of good ideas on a conceptual level, falls short in its execution. Unfortunately, Dreamworks’ Monsters vs Aliens suffers from that exact same problem; it’s not a bad film by any means, but more “functional” than “fantastic” in terms of the story and characters. 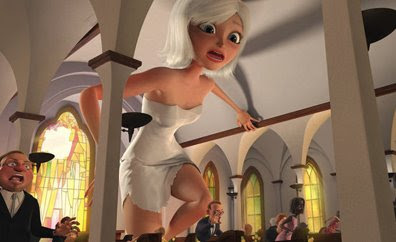 The movie opens with the destruction of a distant planet, which sends a glowing meteorite hurtling across the galaxy, finally landing on Earth. More specifically, it lands on bride-to-be Susan Murphy and saturates her body with “quantonium” energy. She survives the impact but during the ceremony shortly thereafter, Susan suddenly grows to a few inches short of fifty feet tall, destroying the church in the process and attracting the attention of government forces. Renamed “Ginormica”, Susan is relocated to a high-tech prison facility run by General W.P. Monger, who reveals that the government has been secretly incarcerating monsters over the years and that she is merely their latest acquisition. 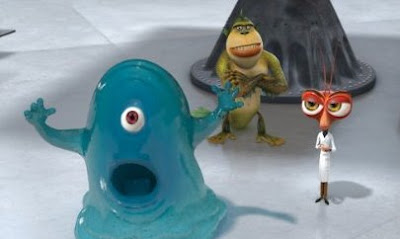 Susan becomes aquatinted with her fellow detainees, each one based on a classic “b-movie” monster: The Missing Link, a half-ape, half-fish hybrid (The Creature from the Black Lagoon); Dr.Cockroach, a scientist with the head and physical abilities of the insect bearing his namesake (The Fly); B.O.B., the one-eyed, gelatinous ooze (The Blob) and the towering mutated grub, Insectosaurus (Mothra/Godzilla). Weeks pass by and while Susan develops a rapport with her cellmates, she continues to pine for her old life and hopes that a cure for her condition can be found. 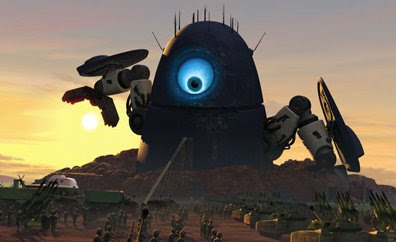 Meanwhile in deep space, the extraterrestrial Gallaxhar has detected a quantonium energy signature emanating from Earth and dispatches an enormous robot to seek it out. Despite the military’s efforts to stop it, the robot marches uncontested across the American countryside. Having run out of options, the President complies with General Monger’s suggestion to use the captured monsters against the robot; Susan and monsters also accept the mission, as they are promised to be set free should they succeed. The team is sent to San Francisco to intercept, but things quickly turn sour; Susan panics and attempts to flee from the battle with the robot in pursuit, having detected the quantonium energy within her body. She ends up cornered on the Golden Gate bridge, but in the midst of trying to save herself and innocent civilians, Susan discovers that she possesses a level of superhuman strength above and beyond even what her increased size would bestow. The monsters finally manage to destroy the robot and are granted their freedom as per their agreement with Warmonger. 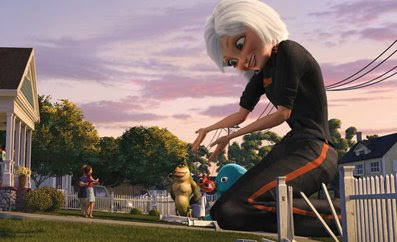 Susan returns home to her family with her teammates in tow, but the monsters' socially-awkward attempts to fit in only end up terrorizing the neighborhood. Susan seeks out her fiancé, Derek, but he ends up rejecting her and dissolves their relationship on the basis that it would only hurt his career. Dejected, the monsters all take their leave and regroup outside the city limits. Susan is initially distraught over her situation but begins to realize that, as a monster, she has accomplished more with her life than as an ordinary woman. 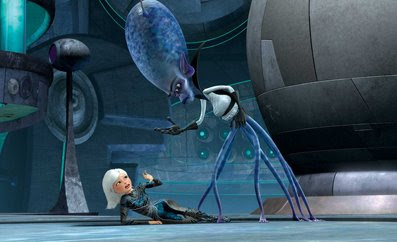 However, just as Susan begins to relish in her moment of character development, she is transported aboard Gallaxhar’s ship where the quantonium is drained from her body, shrinking her back down to her original size. Gallaxhar uses the stolen energy to create an army of clones and begins plans to obliterate most of humanity. Will Susan and her monster friends be able to stop Gallaxhar’s plans, or is humanity doomed? Not to worry- this is a family film, after all. 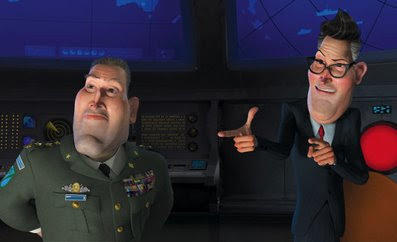 As I stated at the beginning of this review, Monsters vs Aliens isn’t terrible; rather, its biggest problem is that it’s merely unexceptional in terms of its ideas and storytelling. A friend who saw the movie with me astutely commented that a number of story elements would have been much more effective had they simply been shifted around or used as “reveals” instead of being organized in the linear structure that the narrative embraces. Indeed, the film literally drops information into the audience’s lap as it happens- when the alien robot lands on Earth, we already know that it has been sent by Gallaxhar in order to collect quantonium energy. Why not reveal that information later, along with Gallaxhar’s full introduction so as to create some intrigue as to the robot’s intensions and its specific interest in Susan? The story is also odd in that it has some novel concepts but doesn’t do much with them; the government monster penitentiary is a fun idea, but when Susan is given the grand tour of the massive facility, it’s revealed that the Missing Link, Dr. Cockroach, B.O.B. and Insectosaurus have been the only occupants since its creation. Really? That’s all? No other monsters have been captured over the course of fifty years? What a missed opportunity for a slew of cameos by famous (and infamous) movie creatures! It also makes Warmonger’s offer of freedom for the monsters somewhat baffling, since their success would mean that the prison would lose its sole captives and become purposeless. 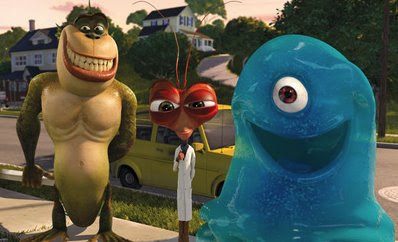 As far as the characters are concerned, there’s not much in the way of depth. This movie is clearly Susan’s tale and while the film does commit time to her personal journey from amenable housewife to 50-foot womyn, the other cast members don’t fare as well; at the very least, B.O.B. and Dr. Cockroach are amusing one-note characters (the former, an easily-distracted dimwit and the latter being a mad scientist who is always “on”), whereas the Missing Link is so underdeveloped, it’s as if his only purpose was to help fill out the celebrity voice acting quotient. The story does briefly touch on the concept that he’s an “alpha male” who’s past his prime, but doesn’t really go anywhere interesting with it. Worse still, Insectosaurus could have been easily removed from the film entirely (aside from one sequence at the movie’s climax) with little to no impact on the overall plot. 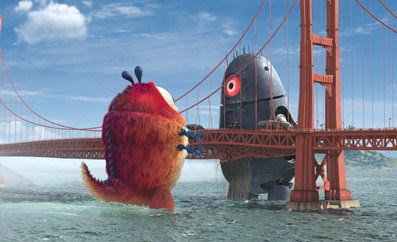 On the plus side, the film has its share of amusing moments and there are some great-looking sequences, such as the chase through San Francisco and the destruction of the Golden Gate Bridge. The filmmakers are clearly aficionados of the 50’s sci-fi and monster genre, as there are a number of references scattered throughout the movie as a nod to fellow fans, but wisely kept peripheral instead of being used directly as jokes. The character designs and animation were mostly solid and it’s nice to see that Dreamworks is continuing down the path of pleasing, cartoon-ish abstraction for its human characters (and away from the creepy “mannequin people” seen in their earlier features like Shrek).

I suppose in a way, my disappointment with Monsters vs Aliens is partially the result of heightened expectation- it’s very much the kind of subject matter I would tackle if I was ever given the opportunity to create an animated feature, so I was really hoping for the best with regards to this movie. All the ingredients for a great film were present, but in the end, stronger storytelling was the one component missing from the mixture. Three out of five.