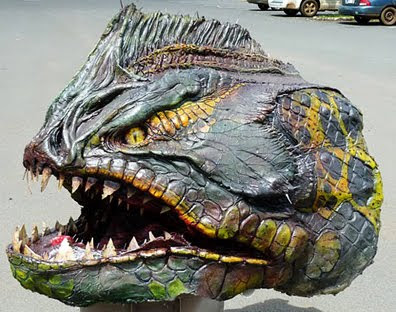 Here’s a photo that’s been making the rounds on the internet featuring the disembodied head of the titular creature from the upcoming Syfy film, Piranhaconda. I must admit, I do like the design- it’s pretty neat. The movie is being produced by Roger Corman and is a follow-up to his earlier effort, Sharktopus... and by “follow-up”, I mean another film featuring a giant monster that’s the composite of two, unrelated animals.

I really should get around to hammering out that Dinobear script... 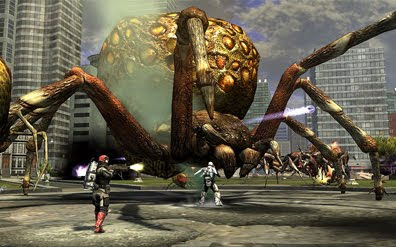 Once again, aliens are attempting to take over the planet and obliterate mankind in the upcoming video game, Earth Defense Force: Insect Armageddon, a follow-up to 2007’s Earth Defense Force 2017. It seems that this time around, the invaders may have drawn some inspiration from the 1960’s Mars Attacks! trading cards; specifically, where the Martians dramatically enlarge Earth insects then unleash hordes of them onto the helpless population. 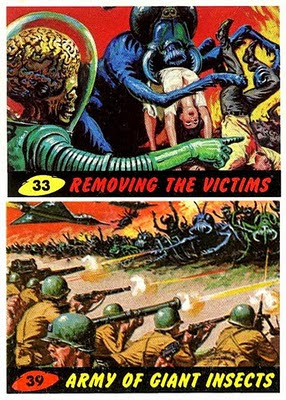 In Insect Armageddon, the players will take the role of armored troopers that battle colossal ants, spiders and hornets, as well as giant robots. Don’t take my word for it- check out the trailer:

It seems that the human forces have access to robot vehicles in some missions as evidenced by the two-legged mech that briefly appears in one shot; a logical strategy, considering that robots are the most effective weapon against giant monsters. It’s a scientific fact.

(Special thanks to blog reader Benjamin for the trailer links)

Posted by Mysterious Pants at 11:37 AM No comments: 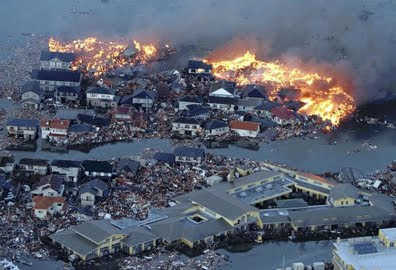 Given the specific theme of this blog, I’ve never bothered to post articles about real world events but considering what’s happened to Japan in the last couple of days, I thought that I’d make an exception. I suppose it’s because Japan has been a significant contributor to the giant monster genre as a whole and there’s a certain grotesque irony in that the country is now experiencing the kinds of devastation commonly portrayed in Godzilla movies and the like. However, it’s one thing to present such events in a harmless fantasy film but there’s nothing more grim than seeing it happen in reality.

I was relieved to find out through emails that a Japanese friend of mine and a former teacher who had returned to the country years ago were both safe, along with their respective families. Unfortunately, the same can’t be said for the thousands of people still suffering in the aftermath of this horrible ordeal. I hope and pray that things improve in the days (and months) to come.

Posted by Mysterious Pants at 10:01 PM No comments: 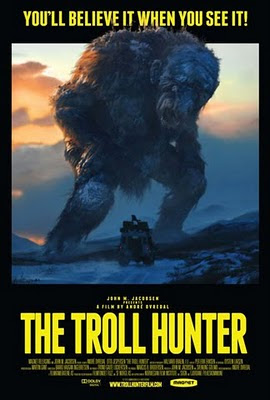 Did you know that transmission towers in Norway actually double as electrical fences to keep enormous mountain trolls confined to certain territories? Why do some trolls turn to stone when exposed to sunlight while others messily explode? What's the difference between a Raglefant and a Tusselad? Thankfully, The Troll Hunter film is here to answer all your questions concerning these previously assumed folklore creatures. 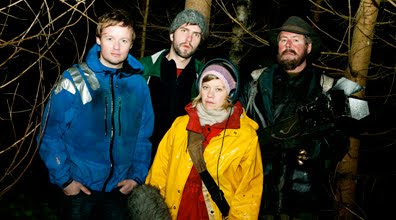 The latest entry in the “found footage” genre, the story finds a trio of Norwegian students on the trail of a suspicious individual, Hans, whom they suspect to be a bear poacher. They soon find out, however, that Hans is actually a government-appointed agent whose job is to covertly keep the indigenous troll population in check whenever they venture into human-populated areas. Realizing that they potentially have an historic expose on their hands, the students decide to follow and record Hans' daily routine, despite his concerns of a recent surge in troll activity.

Keeping in step with other films of its kind, the plot falls into the usual framework: a group of people (at least one of them armed with a camera that is almost NEVER put down) encounter something fantastic but threatening, try their best to survive the experience and ultimately have their story abruptly terminated at the film's end, leaving the audience to ponder the characters' fates. That being said, The Troll Hunter takes a slightly different approach to this formula and structures itself along the lines of a guerrilla-style documentary: think something along the old Crocodile Hunter television show but with humanoid beasts replacing the crocodiles and poisonous snakes. 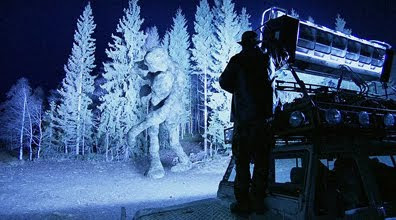 It’s a direction not without consequence, however, as the three film students chronicling the events of the movie are reduced to mostly personality-free, interchangeable human props. Hans, the hunter himself, fares much better by comparison and the movie does a good job of portraying him as a savvy but weary individual whose job has (figuratively and literally) beaten him down to a husk. Honestly, though- if you’re watching a film called The Troll Hunter, chances are it’s not because you’re looking for an exercise in deep character development. Thankfully, despite the conservative budget, there is still a decent amount of monster-related content. This isn’t to say that the trolls are onscreen constantly- they're not- but things still remain interesting even when the protagonists aren’t being chased around. Just watching Hans in a diner explain the particulars of trolls and his profession ends up being an enjoyable watch in and of itself. 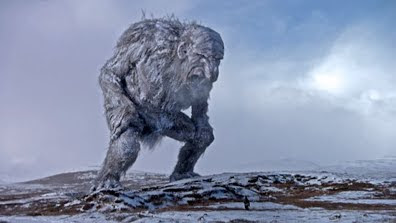 The computer animation effects are solid throughout and I liked how the trolls themselves look as if they’ve stepped right out of old Scandinavian fairy tale illustrations, complete with gangly proportions, thick brow ridges and large, bulbous noses. It really helps the “old school” feel that the filmmakers are trying to convey with regards to the monsters; slick, video game-esque designs would have been nowhere near as effective.

The Troll Hunter is a good example of how to pull off a “shakey-cam” monster movie without resorting to usual nonsense of shamelessly jerking around the audience. It’s hardly a groundbreaking endeavor, but still satisfying and entertaining- other films of this kind (*cough* Monsters *cough*) could certainly learn a thing or two from it. Four out of five.