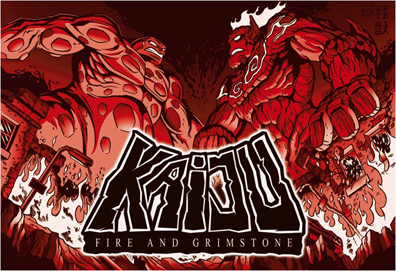 A silent, greyscale book in the landscape format, about the destruction of a town due to the arrival/summoning of two giant monsters, aimed at anyone who has ever enjoyed old school monster movies.

You can check out a preview of the book’s first fifteen pages here (purchasing instructions can be found on preview page sixteen).

Posted by Mysterious Pants at 7:33 PM No comments: 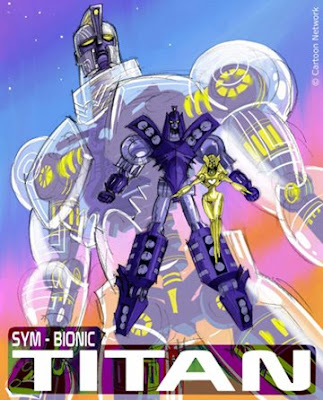 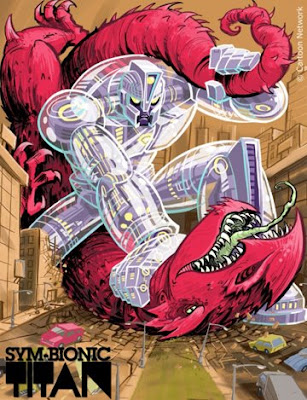 Genndy Tartakovsky, the creator of Dexter’s Laboratory and Samurai Jack is returning to Cartoon Network to produce a new animated series called Sym-Bionic Titan. There’s not much in the way of details yet, other than the story being described as “an exciting hybrid of high school drama and giant robot battles”. I love how the giant robot guy has a body reminiscent of the old Micronauts action figures; I can already envision the toys for this thing.

Posted by Mysterious Pants at 7:27 PM No comments:

Monsters For Your iPhone 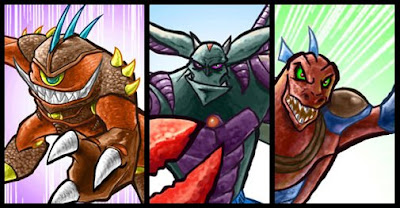 A friend of mine recently brought this to my attention: a downloadable comic called Super Kaiju Hero Force. Here are the details from the publisher’s website:

Super Kaiju Action Force is the story of three young fanboys who win a trip to japan and end up trapped inside the monster costumes used on the hit live-action superhero show, Colossal Man. This first eleven-chapter series follows Garganturo, Democules and Mungor in the exciting origin to the series. The series is released in bi-weekly installments, which are free from the Apple iTunes store for download on your iPhone or iPod Touch device.

Each chapter is roughly twenty to twenty-five pages long and once all eleven chapters are released, they will be replaced with a "Special Edition" download consisting of the entire run along with some extra bonus material. Now all I have to do is make that techno-evolutionary leap and get myself an iPhone...

From the Onion News Network: 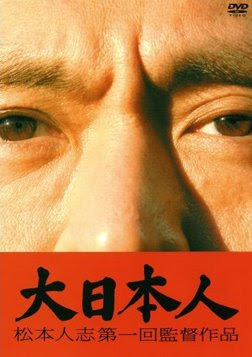 This is one strange film. Seriously. If your opinion of Japanese pop culture is that it can get too bizarre for your liking, then Big Man Japan will do little to sway that opinion. That being said, I’m not advocating that “strange” equals “bad”, but it is the kind of movie that can either perplex or amuse the viewer, depending on their cinematic palate. 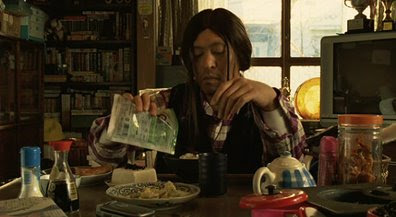 The majority of the film is shot in a documentary-style as it follows the routine of a middle-aged Japanese man, Masaru Daisatou, who is mired in the depths of a mid-life crisis. He’s divorced, lives alone in a small house and finds little enjoyment in his meager-paying job... which happens to be defending Japan from invading giant monsters. It turns out that Daisatou is a sixth-generation monster fighter that can grow to an enormous size when exposed to massive amounts of electricity. However, the public’s opinion of Diasatou and his half-assed efforts to keep Japan safe have grown sour in recent years. To make matters worse, the television program that follows his exploits is dwindling in popularity, his relationship with his ten-year old daughter is growing thin and his recent defeat at the hands (or rather, feet) of a red, devil-like monster has dealt a serious blow to his confidence. 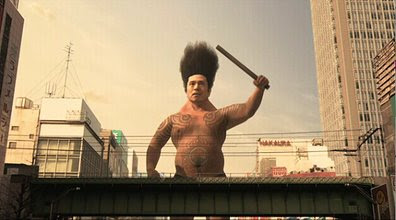 I think that having some familiarity with Japanese giant monster movies and Japanese culture in general will go a long way to help make the experience of watching Big Man Japan a little more palatable. I can easily imagine someone not well versed in either subject being turned off by the film’s weirdness (for example, the last ten minutes of the film totally commits to a parody of Ultraman that would downright baffle anyone not familiar with the character), so using this movie as a way to introduce someone to the daikaiju genre might not be a terribly good idea. The pace of the film is also deliberately relaxed, undoubtedly to accentuate Daisatou’s melancholy existence, but I found myself on a few occasions wishing that it would pick up its pace a bit. 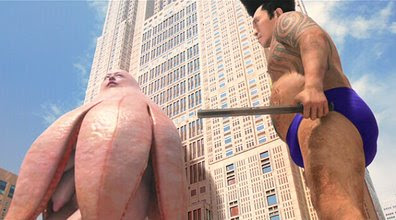 The monster opponents that Daisatou battles are... uh, screwy. There’s really no other way to describe them. They all consist of a human head or face grafted into a grotesque body (with the one exception of the genital eyeball creature- no, that’s not a typo), so they’re not really direct parodies of Japanese giant monsters, per se. I can’t help but wonder if the faces actually belong to recognizable Japanese celebrities or perhaps people who worked on the film. I really don’t know. I’ve read that some of the creatures in the story supposedly represent cultural/political statements about Japan.... that might be the case, but I was too distracted by their weirdness to pick up on any deeper meaning or context. 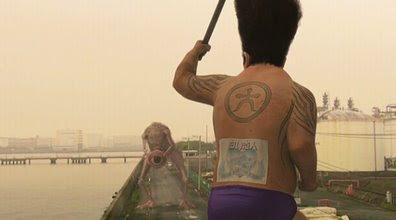 The giant monster content in the film is achieved with what appears to be motion-capture CGI imposed over filmed footage of Japanese locales and, for the most part, it looks pretty decent. Only at the very end of the film do the special effects jarringly switch over to low-budget rubber suit and miniature sets, but it’s done for satirical effect (although it’s still peculiar, even if you understand the parody).

As I've said; if you’re a Japanese daikaiju movie fan then you’ll probably get more entertainment value out of Big Man Japan than someone who is unacquainted with the genre. It’s really not the kind of thing I would watch multiple times but it does have an unorthodox charm that makes it worth seeking out and experiencing at least once. Two and half out of five.