As the Worm Turns 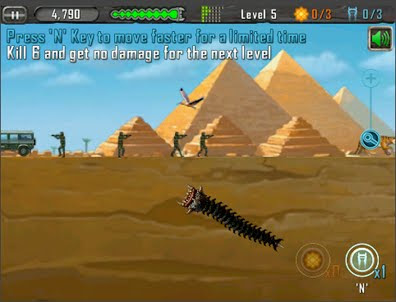 Anyone dabbling in browser-based Flash games back in 2007 may have run across Deathworm, wherein you control a giant, uh... deathworm as it assaults the surface world in a Tremors-inspired fashion. An updated version featuring spiffier visuals was just released last week and can be found over at the Kongregate website. A little bit of advanced warning, though- the control scheme takes some getting used to, as the “up” cursor arrow is for moving the creature forward, regardless of which way it’s pointed.

Posted by Mysterious Pants at 9:11 PM No comments:

Possibly the Greatest Movie Concept, Ever 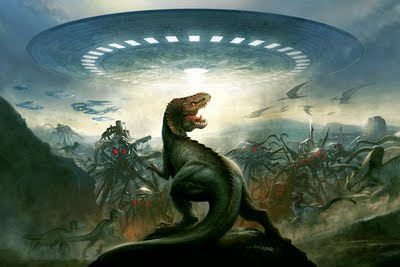 I decided to wait for a little bit before posting about this movie news tidbit, as the idea in and of itself is so outlandish that I half-expected it to be eventually revealed as some sort of internet hoax. According to various sources online, filmmaker Barry Sonnenfeld (Men In Black, Wild Wild West) is collaborating with comics writer Grant Morrison (All-Star Superman, Batman Incorporated) to create a graphic novel and feature film called Dominion: Dinosaurs vs. Aliens. To quote Mr. Sonnenfeld from Deadline (an entertainment-based news site):

“Growing up, my fascination was all things dinosaur, and as an adult, I’ve had some success making films about aliens, so this is a dream come true,” said Sonnenfeld, who first met Liquid Comics founder Sharad Devarajan when he wrote a forward for one of Liquid’s graphic novels. “We’ve been trying to do a project ever since.”

The graphic novel will chronicle a secret prehistoric world war battle. When an alien invasion attacks Earth in the age of the dinosaurs, the planet’s only hope is the giants that roam the planet with, it turns out, a lot more intelligence than previously realized. Sonnenfeld, Rifkin and Devarajan will produce, while Liquid cofounder Gotham Chopra will be executive producer.

Just so we’re clear- while this is definitely an oddball concept, the ten year old in me is doing a glee-filled, double backflip just based on the title alone. I imagine that the aliens will be able to talk but will the dinosaurs? (featuring comedian Gilbert Gottfried as the voice of the T-Rex!) Maybe the dialogue from both parties will be subtitled.

Well, not exactly... but you’d swear it was, had the actual title not been mentioned. I was going to make a reference joke to Robot Jox, but the Filmdrunk site beat me to it. Anyway, be forewarned that this is one of those “abridged movie” trailers that plays like a condensed version of the film- just in case you’re the kind of person that prefers their boxing robot movies to be spoiler-free.

Posted by Mysterious Pants at 6:32 PM No comments: