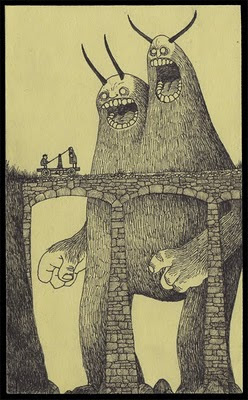 Check out these really cool and creepy sketches by artist John Kenn, which he does entirely on yellow post-it notes. The drawings have a nice Edward Gorey vibe to them as well as a bit of a Lovecraftian undercurrent. I really like how Kenn’s giant monsters feel very “folklorish”; they seem like dark, ancient things that have awakened from a long slumber and are encountering humans for the first time. Very awesome stuff! Check out the blog here.

This December will see the release of Eat Them! for the Playstation Network. Watching the trailer, I’m very much reminded of the old Movie Monster game for the Commodore 64. The “build a monster” concept could be potentially interesting, although the various creatures shown in the video seem to be kinda similar to each other, design-wise (granted, being that this is an early trailer and all, the finished game might offer more visual variety to the monster parts).

Thanks to Benjamin for the head’s up!

Posted by Mysterious Pants at 9:23 PM No comments: 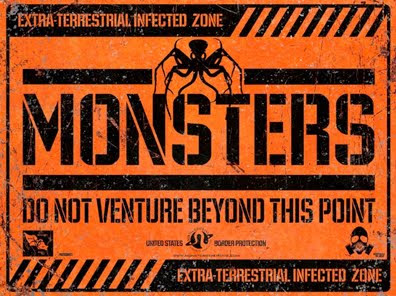 When I had first heard about the British film, Monsters, I was a little wary about committing to posts on the subject, simply because I wasn’t certain if the film had any actual monsters in it. It’s a strange assumption to make, admittedly, but from what little that had been revealed about the story at the time (a good chunk of Mexico is quarantined after alien life forms set up shop in Central America, leaving the infected areas uninhabited by humans) I seriously wondered if the plot might contain some sort of dopey twist ending: It turns out that the aliens had died off years ago and the U.S. continued to play up them up as an active threat in order to stem the tide of illegal immigrants! NOOOOO!

Okay, so now you know why I’m not writing scripts for Hollywood. I suppose that my initial suspicions were influenced the movie’s relatively conservative production budget coupled with a slew of teaser stills mostly featuring shots of the lead characters wandering through empty, decimated areas; my cynical side figured it was going to be M.Night Shamalan’s The Village all over again. Thankfully, a new trailer for the movie has surfaced which does show fleeting glances of the aliens, thus putting my idiot theory to rest:

Check out this cool “educational” video by creator Frank Robnik explaining the biology of the creatures from the movie Tremors. I would absolutely love to see more of these Monstrous Wildlife videos!

The Gift of Baragon 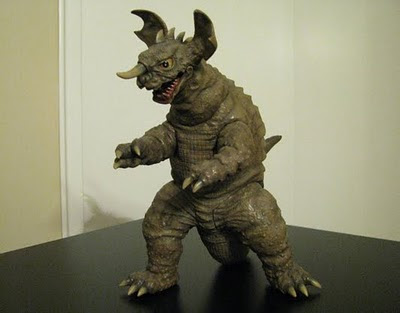 I would have posted this much earlier but I was suffering a technological brain freeze in the form of trying to figure out how my digital camera works. Anyway, this vinyl model of Baragon, the dog/dinosaur creature from Frankenstein Conquers The World (and one of my favorite Japanese giant monsters), arrived in the mail recently from a friend of mine in Japan. I have total admiration for anyone who can paint up a model as nicely as this, especially given my personal track record of screwing up every model I have ever tried to assemble and/or paint in my lifetime. It’s nice, eh? Thanks again for your awesome gift, Koichi! 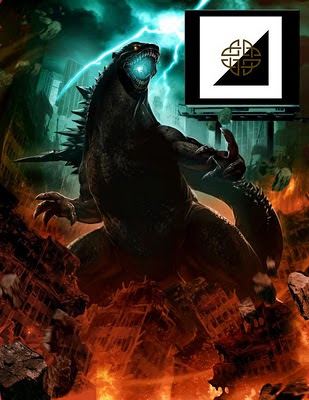 On an unrelated note, a number of people have brought this picture to my attention: it’s supposedly the proposed design for the Legendary Pictures version of Godzilla, which appeared at the recent San Diego Comic Con. The Godzilla 2012 blog has done a pretty comprehensive post on the subject, which you can read over here. Again, it’s a neat picture and if this is indeed the direction that Legendary Pictures is taking with the film, I’m certainly all for it, HOWEVER... I’m still of the opinion that it’s far too early in the game to be treating “teaser images” like this one as any sort of definitive example of what the character’s final interpretation will be in the finished film.