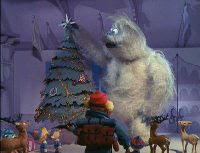 Have a merry Christmas and happy New Year, everyone. I'm off to eat turkey, open presents and dream of sugar plum fairies enlarged to monstrous proportions as they destroy city blocks with their atomic laser vision. See you all in 2008!

Posted by Mysterious Pants at 6:49 AM No comments: 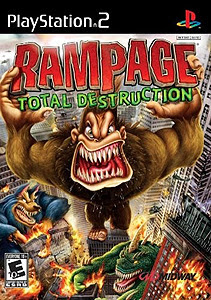 Back in the depths of 1986, arcade goers were introduced to a video game called Rampage, wherein players controlled one of three giant monsters: an enormous ape, a dinosaur/dragon creature and a huge werewolf. The goal of the game was to demolish as many buildings as possible while enduring the near constant onslaught of attacks from various armed forces units (soldiers, helicopters, tanks, etc). The characters’ constantly dwindling health could be recovered by eating various items- including civilians- although more often than not, it usually came down to simply plunking more quarters into the machine, as was the case with most arcade games. 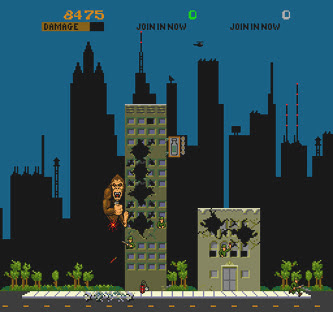 After years of various ported versions and a handful of sequels, the latest version of the game, Rampage: Total Destruction was released in 2006 for the Game Cube/PS2, followed by a Wii version this past February. I recently found a PS2 copy of the game for a paltry twelve dollars, and was curious as to what this current incarnation would bring to the table. So here’s what the newest Rampage has to offer:

2. A wider choice of different-looking monsters

Aaaaand that’s pretty much it. 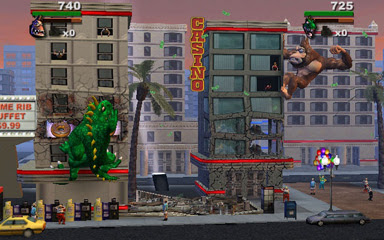 I wanted to like this game, but it’s hard to endorse something that becomes tiring after fifteen minutes of playing it. The biggest problem here is that nothing has really changed since 1986, gameplay-wise. This wouldn’t be as much of a problem if stuff like War of the Monsters and the Atari Godzilla fighting titles had never existed, as it’s hard not to draw comparisons after experiencing city smashing in a free-roaming, 3D environment verses a mock 2D setup. Granted, Total Destruction is a budget title, but in the end it’s of little consolation once the monotony kicks in. 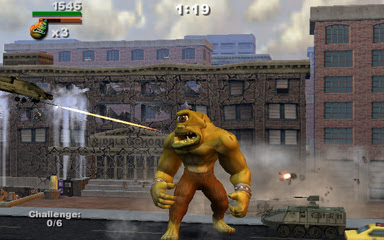 On the plus side, Rampage: Total Destruction at the very least looks nice. The environments and characters are colorful with a slightly cartoonish aesthetic. There are thirty different monsters (with an additional ten for the Wii version) to unlock during the course of the game, although there are really only minor differences between each of them in terms of power and abilities. In fact, it’s better to stick with the slower, damage-resilient creatures verses the nimble but more delicate ones, simply because the later levels of the game become so saturated with enemy attacks that it becomes nearly impossible to avoid being hit, no matter how fast you are. As a bonus, the disc also features a ported version of the original Rampage as well as one of the sequels, World Tour. While they provide a nostalgic trip down memory lane, they further drive home the aforementioned fact that the core game experience hasn’t really evolved much in over twenty years. 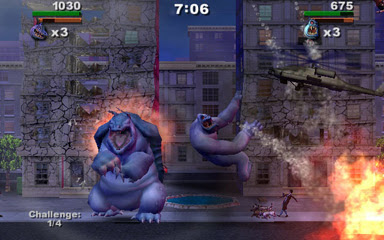 I wish that I could recommend this title, but I really can’t in good conscience; if you’re still really curious, at least try to track down a copy under fifteen bucks. Two out of five.

Posted by Mysterious Pants at 11:48 AM No comments: