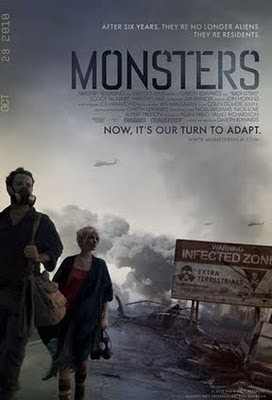 There’s a brief scene in Gamera: Guardian of the Universe, wherein a customer visits a grocery store shortly after Gamera has first appeared in Japan and complains about the inflated price of fish. The cashier explains that the added expense is simply the result of low supply, as the local fishermen are reluctant to go out on the ocean for fear of running into the creature that might still be lurking in the general vicinity. It’s one of those little mundane things that are often overlooked in movies of this kind but adds a welcome, if not subtle, bit of flavor to overall setting. When the rampages of gigantic beasts are a constant danger that looms over humanity, how would the everyday aspects of the world change in response?

In the setting of Monsters, the threat comes not from overgrown bugs or reawakened dinosaurs but a horde of enormous, extraterrestrial octopi which spawned from the micro organisms contained in a probe that crash lands in Mexico. Six years later, the U.S. has walled off its borders and routinely bombs the territory claimed by the aliens in an attempt to curb their numbers with little regard for the people that still live near the area. An American photographer, Andrew, is contacted in Mexico by his employer to escort his daughter back home by ferry before the aliens’ breeding season begins (which will leave them stuck where they are for months if they don't leave in time). As expected, their initial plans go awry and the pair find themselves with no choice but to cross through the “infected zone” in order to return to America.

Let’s just cut to the chase here; if you’re hoping for a cinematic monster mash, prepare to be disappointed. It’s not that Monsters is an entirely bad movie, but the squid thingys are basically peripheral decoration in a film that’s focused on something else entirely. This is really a road trip story about two somewhat selfish characters who come to understand each other in a parable concerning globalization and the strained relationship between Mexico and the United States.

So do the octopus creatures really need to be there? Not really. All things considered, with some slight tweaks, the movie could have just as easily taken place in some war-torn part of our normal world. The problem here is that the film is built around a high concept idea that it dangles in front of the audience like a carrot then turns around and mostly ignores. During the course of the story we get to see the aftermath of the aliens’ handiwork (the remains of boats that have been thrown up into hillsides, decimated urban patches) and while there are plenty of scenes where the characters tense up at offscreen noises, the trek across what we’ve been told is supposedly dangerous territory is otherwise relatively incident-free (as far as the monsters are concerned, anyway). Only at the very end of the film do two aliens finally appear for a brief sequence but it’s just not enough of a payoff to offset the previous near-hour and a half of waiting.

It’s unfortunate that the film didn’t gel with me on a story level as I found it actually quite nice from a purely visual standpoint. There are some really nice shots throughout, especially for a guerilla-style, “hand cam” movie. The performances of the two leads are also solid, although the people they play are not so much endearing as they are self-centered twits. I suspect, however, that this may have been on purpose in order to play up the have/have-not dynamic between the American and Mexican characters.

As I mentioned at the beginning of this review, the scene in the grocery shop from Gamera: Guardian of the Universe is a neat little spin on an idea. In the case of Monsters, I imagine that budgetary limitations is what kept the movie confined to the store, so to speak. It’s not that the core concept was lacking by any means, but its execution is what made the finished film come across feeling like a missed opportunity. Two and a half out of five.

Posted by Mysterious Pants at 9:06 PM

An excellent review!
I love your blog so much that you have won an award! Congratulations!

I've just read that the director of this film has been tapped for the new Godzilla movie. Does that give you hope or fill you with dread?

I dunno... I suppose that the cynic in me is a little worried but to be fair, most of the woes in Monsters were rooted in it trying to tackle subject matter that the budget wasn't equipped to properly handle. I am curious to see what the director (Gareth Edwards) can do when he has more money to play with.

As long as he doesn't lose sight of the fact that audiences are going to see a Godzilla film primarily to watch the lead monster wreck stuff and fight the military, there may be hope.

I suppose we'll just have to wait and see.

@Cyberschizoid- thanks! I'd make a speech if I wasn't so completely horrible at doing such things. ^_^