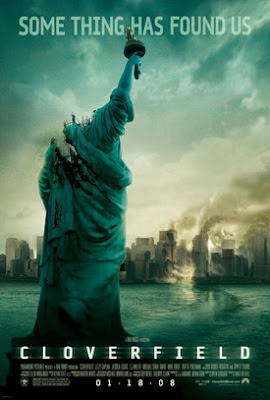 In my previous blog entry about Godzilla Unleashed, I touched upon the harsh mistress that is “hype” and the negative backlash it can potentially cause when the very expectations it helps create are not realized once it comes time to live up to them- and now I’m posting a review for Cloverfield. Finally, after over half a year of waiting, audiences finally got to see the culmination of the various tie-in promotional website content, red herrings, and theories up on the screen. So, was it worth all the fuss? 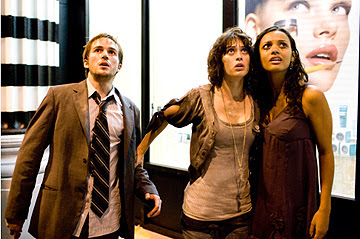 Well, that entirely depends on what you’re expecting from the film. The plot does admittedly hinge on the old filmic device of Characters Doing Stupid Things- a horror story about a haunted house requires a collection of common sense-free victims to go inside so as to ensure that the movie is more than five minutes in length. In the case of Cloverfield, you have to accept that Rob- the lead character- and his friends are willing to venture into a city being leveled by a huge beast so that they can save a mutual acquaintance, Beth, who is trapped (and possibly dying) in her apartment. Even though Rob and Beth had been previously involved romantically, it’s still a questionable bit of motivation at best, especially in lieu of the increasingly dangerous situations the group finds itself in as they stubbornly solider onward in their goal. In a way, the film almost undermines itself in this regard; the portrayal of the monster’s threat is realized so effectively (particularly in an intense sequence involving an encounter at street level between the creature and military ground forces) that it becomes difficult to believe that the characters are able to continuously ignore their own sense of self-preservation. I suppose that my affection of giant monster films helped me to somewhat ignore the spotty logistics of the script, but when it came down to it, all I wanted was a movie about an enormous monster tearing up architecture as witnessed by the terrified humans caught underfoot; not a film where everyone clears out of Manhattan and then safely watches the rest of the events unfold from a news channel in New Jersey while they discuss their feelings. On that level, Cloverfield does deliver. 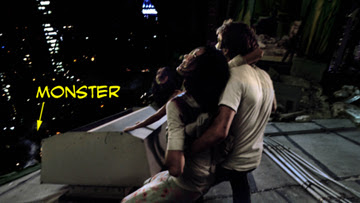 As far as the whole Blair Witch-esque “giggly camera” style that many critics have expressed a distain for, I really wasn’t that bothered by it. That being said, I wouldn’t want to see it done again in a sequel (which, thanks to the success of the film in its opening weekend, is probably being discussed as I write this). The camera perspective approach arguably works as an introductory narrative device as well as a method to control reveals and create intrigue, but by the end of the movie, the audience is pretty much up to speed with what the creature actually looks like and it’s destructive capabilities. Another movie of fleeting glances and blurry footage would be kind of annoying and insulting.

As for the creature itself, it certainly deserves points for originality. It’s a unique creation for sure, but looks like something that you’d encounter in a sci-fi video game like Doom or Half-Life. Since I can’t offer a picture of it, I’ve thrown together this visual equation to help with the description: 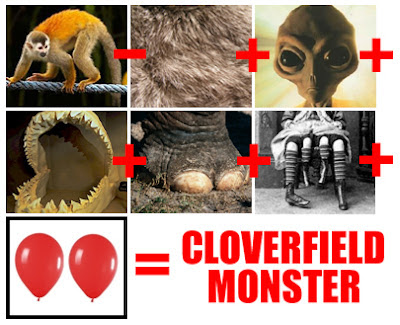 (The red balloons represent what seemed to be a pair of external lungs/gills that sat on either side of the monster’s head). The weird parasitic “fleas” that drop off from its body and attack people are considerably less inspired, however; their design similarities to the giant bugs from Starship Troopers (but with more teeth and eyes) is almost distracting because you can’t help but draw comparisons between the two whenever they’re onscreen.

To sum things up, if you’re a giant monster movie fan, definitely check out Cloverfield. Despite its problems, it’s still a half-decent entry in the genre and worth a watch.

Three out of five.

Posted by Mysterious Pants at 8:28 PM

A fair review, and you nailed one of my main problems: the characters' actions undermine the film's conceit. Despite the found-footage presentation, I never once believed that this was really happening. Due to either ineptitude or cynicism, the filmmakers thought the hyper-realisitic "YouTube generation" style would be convincing even if the characters talked and acted like standard-issue Hollywood cutouts. I do like the found-footage idea, though, and it provided for a few memorable bits, like the genuinely eerie title scene and the part when they watch news footage of an unindentifiable thing smashing up against a building, lit only by helicopter spotlights. The movies runs most effectively on atmosphere, which it doesn't seem to realize. Still, it's a cool concept, and with actual effort this could have been as scary as The Blair Witch Project, or the infamous birthday party scene in Signs.

I suppose that's always going to be the nagging problem of the "found footage/handycam" format- at times it's hard the believe that the camera operator never just ditches the equipment and makes a run for it.

Then again, it wouldn't be much of an entertaining film if the footage primarily consisted of a prolonged shot of the ground where the camera was discarded, though...