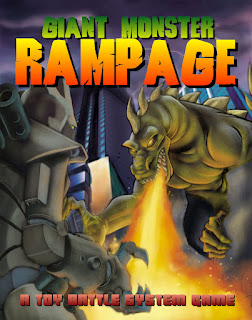 In the mood for a tabletop game but can’t bear the idea of sitting through another tedious session of Monopoly? Game author Ken Lewis just might have a solution to your problem.
Radioactive Press has just released a new, deluxe edition of Giant Monster Rampage, a strategic “war game” wherein players create and battle giant abominations of science and nature against one other. Much in the vein of an RPG, each player creates a monster character using a set number of points to determine its strength and durability as well as what kinds of special attacks it can perform. From there, the monsters are placed on the playing field (i.e. a coffee table or something similar) which represents a given location and then the battle begins. Each player takes a turn moving and attacking with their monster until one is defeated. 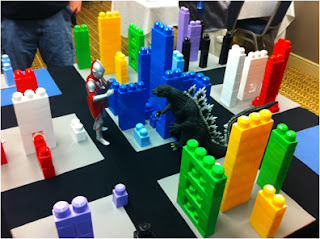 The game doesn’t really have any pieces other than what you decide to use to represent the monsters and buildings: action figures, a drawing on a card, ground beef sculptures (not recommended)... whatever you have on hand. The game can be purchased at the link below and is available as a printed copy or digital PDF form:
Radioactive Games
Posted by Mysterious Pants at 9:32 PM

Thanks for posting this! I am always on the lookout for new tabletop games.

I've found it to be a fun little game, especially when combined with the robot game.

I even did a bit of a prelude to a scenario for my game:

The players seemed to enjoy the game quite a bit too.

I'm dying to know what kind of blocks those are for the buildings in that picture. They look awesome! Anybody know?

I was going to guess "Duplo" blocks but I think that they're something other than those.