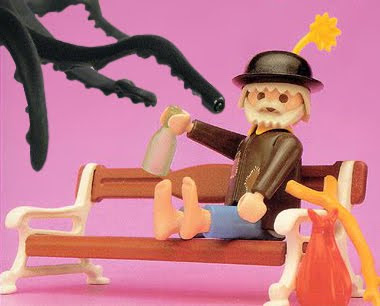 I came across mention of the upcoming Irish monster movie, Grabbers, on Twitchfilm.com and have to admit that I chuckled at the synopsis. From the site:

An idyllic remote Irish fishing village - replete with twinkly-eyed eccentric Waking Ned Devine characters - is invaded by enormous, tentacled creatures from the sea who are picking off the villagers one at a time. The inhabitants learn that the one thing the creatures don't like is alcohol, it makes people taste horrible, so they realize that in order to stay alive, they're going to have to get as pissed as possible.

You gotta give the filmmakers credit- drunks verses monsters is something that nobody has tackled yet. Apparently the film is wrapping up production in the next month, then plans to spend almost a year (!) on post-special effects.

Posted by Mysterious Pants at 10:10 PM

And let me guess the villagers make a last stand against the tenacled hordes when everyone is half in the bag on St. Pattys Day?? ;)