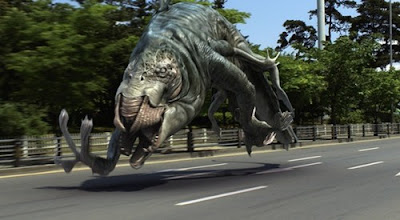 Well, it’s not the actual title but I couldn’t help it, what with the shot of the creature barreling down what appears to be a highway. Little is really known about the film at this point other than the following bits:

1. The film is apparently a prequel to the original.

2. All the CGI special effects work will be exclusively kept in Korea (unlike the first, which was a co-produced effort).

3. The Korean government will be throwing some considerable dough at the production as funding assistance.

4. The original’s director will not be involved.

5. The script will be helmed by Kang Full, a popular Korean comic artist/writer.

While I really loved The Host and the idea of a cinematic follow-up, I’m a little torn about it being a prequel. If you’ve seen the first movie, you know how the “Gwoemul” isn’t exactly a subtle predator whenever it takes hunting excursions onto dry land. So we’re going to have a story that takes takes place before the first with the same giant creature (possibly more than one, according to some rumors floating around) going on a brazen killing rampage that is completely forgotten about by the time the events in the first movie come around. Hmmm.

I suppose that I really shouldn’t cast any dispersions before I see the final, finished film- I guess that it just comes down to nervous jitters over the continuation of a movie that I greatly enjoyed.

Posted by Mysterious Pants at 7:58 PM

Wow! I had never heard of this movie. I guess it mustn't have been at the cinema in this part of the world... *opens bittorrent*

I agree with you! I'm pumped about another "Host" movie but I am having a lot of doubts... I wish the director from the first film was in charge, I would feel better. The first one was just so different and well done. I thought anyway.