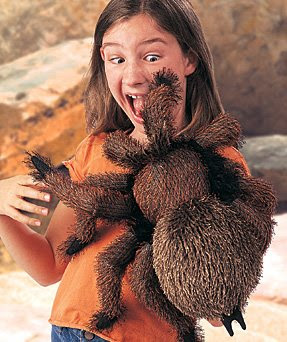 Jason, a visitor to my blog, was wondering if I could identify a giant spider movie that he saw on television when he was younger. He writes:

I just came across your blog and I have been trying to find info on this movie that I saw on tv as a kid. This had to have been made in the 60's or early 70's.

The only parts I can remember are when a man and a woman entered a large room and on the ceiling were huge tarantula type spiders. they attacked, and as the man and woman tried to leave the room (through an exit with two heavy wood doors) a big spider leg wrapped around the door and pinned the man to it. The woman screamed and I turned the channel.

Later, there was an odd scene where there were a bunch of men having a conversation around a table in some kind of office. A giant spider walks down the hallway, looks into the room and then wanders away. The men either dont see it ( ?? ) or simply dont care and are ignoring it altogether. ( !! )

I wish I could remember more about this film but it freaked me out as a young kid so I kept on turning the channel.

The first movie that popped into my head as a potential candidate was the 1975's The Giant Spider Invasion, but it didn't feature the scenes mentioned or realistic special effects by any stretch.  My second guess was an obscure made-for-TV film from 1977 called Curse of the Black Window, which was about a murderous woman who could transform into a giant tarantula during a full moon. Unfortunately, it doesn't seem to jive with the clues either, as there is only one giant spider in the story. The only other possibility that I can think of is that the movie was not about giant spiders per se, but perhaps a film or television production about something else entirely that happened to have scenes with giant spiders in it. Needless to say, I'm officially stumped.

Once again, the clues are as follows:

4. The giant spiders are numerous and of the tarantula variety.

5. One scene involves a man and woman who enter a large room with a ceiling covered in huge tarantulas. A gigantic spider leg wraps around the door to the room and pins the man to it.

6. In another scene, a giant spider peers into a room with a bunch of men sitting around a table and then walks away. Its presence seems to go unnoticed.

If anyone out there has a guess as to what this mystery movie might be, leave a message in the comments section, or write me at pantsofmystery@yahoo.com and hopefully we might be able to figure out an answer.

Posted by Mysterious Pants at 3:16 PM

An honest guess but it doesn't fit the clues, unfortunately. That movie was in black and white and although there is a giant spider in the film, there's only one and it's about as big as a medium-sized dog. The plot was more centered on the male lead character who got bit by it turning into a half-man, half-spider creature verses the giant spider in and of itself.

Boy that is a good one! I thought like you that "The Giant Spider Invasion" was the answer, but you are right so many different things don't match.

Maybe the reader is mistaken about some of the things he remembers?

I also thought of "The Food of the Gods", but I don't think there were any spiders in that one.

One of the scenes described sounded a little like "Kingdom of the Spiders". That one had real "life-sized" tarantulas in it.

I feel your pain. In the past decade since i started writing about monster films, I have been asked these kind of questions about a zillion times. Sometimes you get them and sometimes you don't.

I agree- I'm beginning to think that there's a mistaken bit of info in there which is throwing the search off the trail... specifically, the suspected era the film possibly hails from.

I've been wondering if the movie in question is actually Spiders from 1999, which not only featured giant tarantulas but a good amount of "traditional" special effects, which could be misinterpreted as an older production (since most films made nowadays- even the straight to DVD ones- predominantly use CGI). I'm going have to hunt down a copy that thing and see if my hunch is right.