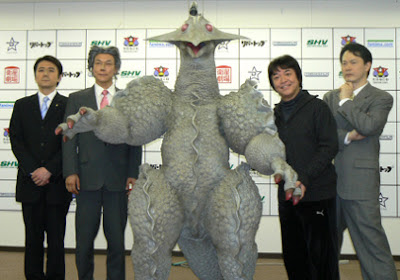 Recently, two announcements have popped up on various news-related websites concerning a couple of upcoming giant monster projects: Guilala’s Counterattack: The Touyaku Summit One-Shot Crisis is a sequel to, or possibly a remake of, the X From Outer Space from Shochiku in starring the infamous chicken/lizard alien. The second is a straight-to-DVD, re-imagining of an old Charlton comic book called Reptisaurus, which actually started out as a tie-in book to the Danish monster movie Reptilicus; that is, before the publisher decided to change the name and design of creature after the second issue so as to circumvent the licensing fees.

While it’s great that these new movies are being made, there is a part of me kinda wishes that somebody would take the opportunity to come up with some new creations verses revisiting older ones. Say what you will about Cloverfield, but it at least deserves props for introducing an all-new monster into the genre- particularly in this current age when most film companies would rather stick with endless remakes.

Reptisaurus is an odd duck in this regard however- while it is based on a preexisting character, it’s one that hails from a rather obscure comic book from the early sixties which ran for all of nine issues total (if you count the two issues when it was still called “Reptilicus”, plus a one-shot special edition). I might be mistaken, but isn’t the whole idea of brand recognition singularly dependent on the actual “recognition” part? And check out this comparison- first, the comic: 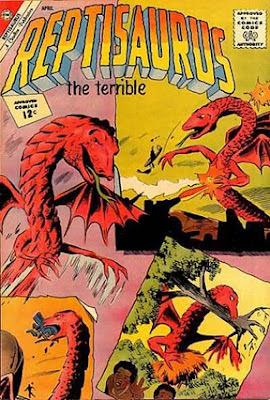 And the upcoming movie version: 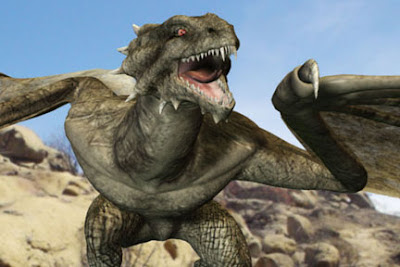 Not much in the way of similarity between the two, is there? Of course they’re both winged, dragon-like beasts, but you’d never guess for a minute that they’re actually the same monster by any stretch (the comic version’s design would change even further near the end of the book’s run). I guess the point I’m trying to make here is this: if the production company behind this new movie paid anything above one dollar to secure the legal use of a little-known character in order to make a film reinterpretation that bears almost no relation to the source material, then it’s a baffling decision at best. Did they just want the name? It’s not as if there aren’t a bunch of alternate titles that could be used which are not only befitting of a straight-to-DVD monster flick, but don’t cost a dime to use. Here are some that I came up with off the top of my head:

Posted by Mysterious Pants at 8:35 PM

Re: "Reptisaurus." Since the comics publisher in question (Charlton) has been out of business for over twenty years, and none of their properties have ever been revived in any meaningful way, I'm guessing that the trademark "Reptisaurus" has been long up for grabs – assuming that Charlton ever bothered to trademark it at all, as they were notoriously lax about such matters.

So, why not take the name? It most likely didn't cost a cent.

BTW – what do you think about those new colorized versions of the early Harryhausen films from Columbia?

If the name is free to use, then yeah- all power to 'em.

As for colorization... I've never been much of a fan, truthfully, although I openly admit to not being familiar with the current state of the technology (my last run-in with it was a colorized version of Mighty Joe Young that looked absolutely hideous). I didn't pick up the new version of 20 Million Miles to Earth when it came out, as I still own the original 2002 DVD release. I did recently acquire the It Came From Beneath The Sea disc, but I haven't had an opportunity to sit down and watch it yet.

I dunno- I've always liked black and white films just they way they are, as they have a certain "je ne sais quoi" about them. That charm tends to get compromised once someone goes in with a computer program and starts coloring everything purple and green; I suppose that I'm somewhat of a stubborn traditionalist in that regard.

I'm with you. Despite Ray's insistence now that those films would have been shot in color had it been economically feasible, they were, nonetheless, designed and lit and shot for black & white. Laying colors over the graytones just results in an unnatural, unpleasant, muddy look.

That said, the colorized EARTH VS. THE FLYING SAUCERS worked slightly better than IT CAME FROM BENEATH THE SEA or 20 MILLION MILES TO EARTH -- in both of the latter films, the creatures are colored an odd, dark green that simply doesn't blend in with everything else -- which looks brown.

I had the original DVD releases already, as well, but I was sent the new ones for review in my DVD column. The new discs do have some nice extras, and still offer the B&W versions, in nicely cleaned-up transfers.

In about a week or so- I've been sort of procrastinating...